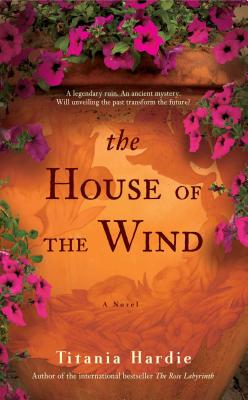 The House of the Wind

The internationally bestselling author of The Rose Labyrinth returns with a love story of magic and healing that takes readers from the heartache of a young human rights lawyer in present-day San Francisco to the lives of a courageous trio of women in medieval Tuscany. A legendary ruin. An ancient mystery. Will unveiling the past transform the future? San Francisco, 2007. Madeline Moretti is grieving after her fianc 's death. Nothing brings her joy any more, and Maddie's grandmother, a fiery Italian, sends her to Tuscany to heal. Here, Maddie is immersed in the mystery of a ruined villa. Destroyed centuries ago in a legendary storm on the Eve of St. Agnes, it has been known ever since as the Casa al Vento--the House of the Wind. Tuscany, 1347. Mia hasn't spoken since her mother's death and lives in silence with her beloved aunt. One dark night, a couple seeks refuge in their villa. Accustomed to welcoming passing pilgrims, Mia is entranced by the young bride's radiance and compassion but mystified by her reluctance to reveal even her name. Where has she come from, and why must her presence be a secret? Centuries apart, each searching for a way to step into her future, both Mia and Maddie will be haunted by the myth of the young woman who walked unscathed from the ruins of the House of the Wind.

Praise For The House of the Wind…

“Utterly fascinating. Totally absorbing. A magical blend of historical fiction and modern day suspense, The House of The Wind is a marvel of the esoteric. An entrancing and enchanting novel that combines myth and folklore, past and the present, mystery and romance, and clearly cements Hardie’s burgeoning reputation as a literary conjurer.” —M.J. Rose, internationally bestselling author of The Book of Lost Fragrances

“Addicting.... Hardie has merged Under the Tuscan Sun with Erin Brockovich into a story both heavily atmospheric and thematically hypnotic.” —Publishers Weekly (starred)

“At times lyrical, the tale of Maddie’s journey will charm those who are enraptured by the Tuscan mystique.” —Booklist

Titania Hardie is the author of The Rose Labyrinth, as well as several books on folklore, magic, and divination. A native of Sydney, Australia, she lives in Somerset, England with her husband and two daughters.
Loading...
or support indie stores by buying on