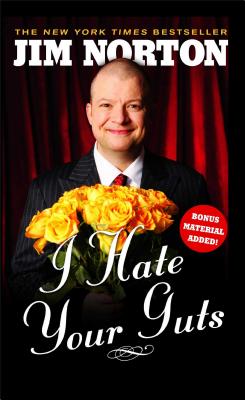 I Hate Your Guts (Paperback)

This New York Times bestselling author may hate your guts, but you’ll be laughing too hard to care in this blisteringly funny collection.

What do Steve Martin, The Reverend Al Sharpton, and Dr. Phil have in common? Jim Norton hates their guts. In his deviant pseudo-memoir Happy Endings, Norton delivered his uncensored and controversial brand of humor on everything from his affinity for hookers to his romantic woes. Now, he unflinchingly spews his thoughts on everyone from the bully he despises from high school, to Hillary Clinton and Al Sharpton.

Offensive, brutally honest, and most important, sidesplittingly hilarious, I Hate Your Guts features 35 essays showcasing the candid, outrageous brand of dirty comedy that has earned him legions of devoted fans both on the radio and on the road.

Jim Norton is stand-up comedian who is best known for his extremely raunchy brand of humor. He was a regular on both seasons of Comedy Central's Tough Crowd with Colin Quinn, played the caustic Rich on HBO's Lucky Louie, and has starred in his own HBO comedy specials. He has also cohosted the AVN awards twice, and performed his stand-up all over the country. He is the author of two books and lives in New York City.
or
Not Currently Available for Direct Purchase
Copyright © 2020 American Booksellers Association