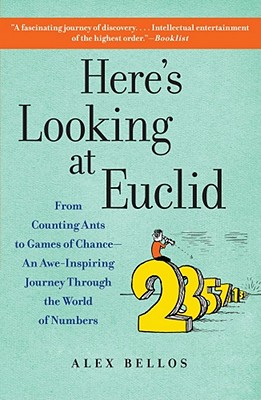 Too often math gets a bad rap, characterized as dry and difficult. But, Alex Bellos says, "math can be inspiring and brilliantly creative. Mathematical thought is one of the great achievements of the human race, and arguably the foundation of all human progress. The world of mathematics is a remarkable place."

Bellos has traveled all around the globe and has plunged into history to uncover fascinating stories of mathematical achievement, from the breakthroughs of Euclid, the greatest mathematician of all time, to the creations of the Zen master of origami, one of the hottest areas of mathematical work today. Taking us into the wilds of the Amazon, he tells the story of a tribe there who can count only to five and reports on the latest findings about the math instinct—including the revelation that ants can actually count how many steps they’ve taken. Journeying to the Bay of Bengal, he interviews a Hindu sage about the brilliant mathematical insights of the Buddha, while in Japan he visits the godfather of Sudoku and introduces the brainteasing delights of mathematical games.

Exploring the mysteries of randomness, he explains why it is impossible for our iPods to truly randomly select songs. In probing the many intrigues of that most beloved of numbers, pi, he visits with two brothers so obsessed with the elusive number that they built a supercomputer in their Manhattan apartment to study it. Throughout, the journey is enhanced with a wealth of intriguing illustrations, such as of the clever puzzles known as tangrams and the crochet creation of an American math professor who suddenly realized one day that she could knit a representation of higher dimensional space that no one had been able to visualize.

Whether writing about how algebra solved Swedish traffic problems, visiting the Mental Calculation World Cup to disclose the secrets of lightning calculation, or exploring the links between pineapples and beautiful teeth, Bellos is a wonderfully engaging guide who never fails to delight even as he edifies. Here’s Looking at Euclid is a rare gem that brings the beauty of math to life.

Alex Bellos has a degree in Mathematics and Philosophy from Oxford University. Curator-in-residence at the Science Museum and the Guardian’s math blogger, he has worked in London and Rio de Janeiro, where he was the paper's unusually numerate foreign correspondent. In 2002 he wrote Futebol, a critically acclaimed book about Brazilian football, and in 2006 he ghostwrote Pelé's autobiography, which was a number one bestseller. Here’s Looking at Euclid was shortlisted for the BBC Samuel Johnson Prize and was a Sunday Times bestseller for more than four months.

Praise For Here's Looking at Euclid: From Counting Ants to Games of Chance - An Awe-Inspiring Journey Through the World of Numbers…

“An expansive overview of numbers and figures, and those who find them irresistible….A smorgasbord for math fans of all abilities.”—Kirkus Reviews (starred review)

“A lively romp through many different fields of mathematics.”

“A delightful worldwide tour of the most interesting and weirdest in math.”—The Daily Beast
or support indie stores by buying on
(This book is on backorder)
Copyright © 2020 American Booksellers Association