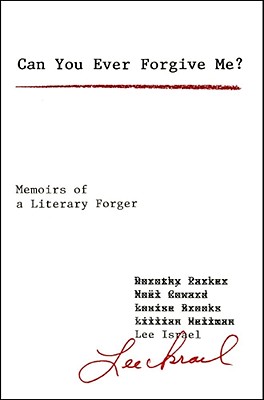 Can You Ever Forgive Me?

“Lee Israel is deft, funny, and eminently entertaining…[in her] gentle parable about the modern culture of fame, about those who worship it, those who strive for it, and those who trade in its relics” (The Associated Press). Exquisitely written, with reproductions of her marvelous forgeries, Can You Ever Forgive Me? is “a slender, sordid, and pretty damned fabulous book about her misadventures” (The New York Times Book Review).

Praise For Can You Ever Forgive Me?: Memoirs of a Literary Forger…

"With her witty, jeweled prose and her troubling antics, literary outlaw and minx Lee Israel is once again causing a ruckus. Do I trust her and her admission of guilt? Do I condone her actions? I'm loving the experience of trying to answer these questions." -- Henry Alford, investigative humorist, author of Big Kiss, Municipal Bondage, and contributing editor to Vanity Fair

"Israel displayed an excellent ear and fine false turn of phrase...Now, all these years later, she's written a slender, sordid and pretty damned fabulous book about her misadventures...There's no honor in anything she did, but after reading Can You Ever Forgive Me? it's hard to resist admitting Israel to the company of such sharp, gallant characters as Dawn Powell and Helene Hanff, women clinging to New York literary life, or its fringes, by their talented fingernails." -- Thomas Mallon, The New York Times Book Review

"Lee Israel is deft, funny and eminently entertaining...She also has a good tale to tell. "Can You Ever Forgive Me?" offers a gentle parable about the modern culture of fame, about those who worship it, those who strive for it and those who trade in its relics." -- Jonathan Lopez, The Associated Press

"Whether she's writing about being banned from the Strand bookstore or stealing authentic letters from university libraries, she does so with honesty and a rapier wit. And in an age of promiscuous apology for the slightest wrongdoing, the fact that Israel never fully apologizes for her crimes is actually part of the charm of her memoir." -- VeryShortList

Lee Israel was the author of Can You Ever Forgive Me?, Estee Lauder: Beyond the Magic, Kilgallen, and Miss Tallulah Bankhead. She also worked as a copyeditor for Scholastic and American Express Publishing. She died in 2015.
Loading...
or
Not Currently Available for Direct Purchase