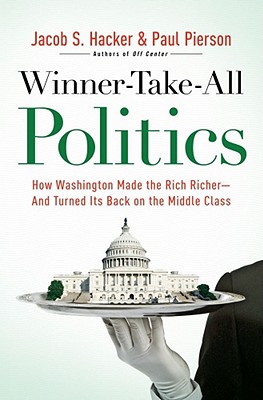 Paul Pierson is the John Gross Professor of Political Science at the University of California at Berkeley. He is the author of Politics in Time, Dismantling the Welfare State?, and (with Jacob S. Hacker), American Amnesia: The Forgotten Roots of Our Prosperity; Winner-Take-All Politics: How Washington Made the Rich Richer—and Turned Its Back on the Middle Class; Off Center: The Republican Revolution and the Erosion of American Democracy. His commentary has appeared in The New York Times Magazine, The Washington Post, and The New York Review of Books. He lives in Berkeley, California.

“Important. . . . The collapse of the American middle class and the huge transfer of wealth to the already wealthy is the biggest domestic story of our time.” —Jonathan Alter, The New York Times Book Review

“Hacker and Pierson argue strongly that the concentration of income at the top is not just the work of deep economic forces. It is aided and abetted by politicians who favor the very rich or allow policies that once favored the rest of us to erode. Hacker and Pierson look closely, sharply, and entertainingly at the way that interest-group politics and the political power of money have allowed this travesty of democracy to happen. This book is a wake-up call. Read it and wake up."—Robert Solow, winner of the Nobel Memorial Prize for Economics in 1987

“The clearest explanation yet of the forces that converged over the past three decades or so to undermine the economic well-being of ordinary Americans is contained in Winner-Take-All Politics.”—Bob Herbert, The New York Times


“Engrossing. . . . Hacker and Pierson . . . deliver the goods. . . . Their description of the organizational dynamics that have tilted economic policymaking in favor of the wealthy is convincing.”—Justin Fox, Harvard Business Review

“Over the past generation, the middle class has been repeatedly battered, and its once-solid foundations have begun to tremble. Uncovering the hidden political story behind this great economic challenge, Jacob Hacker and Paul Pierson shed light on what has gone wrong—and why. Their book is must-reading for anyone who wants to understand how Washington stopped working for the middle class.”—Elizabeth Warren, Harvard Law School, Chair of the Congressional Oversight Panel on the U.S. banking bailout, and author of The Two-Income Trap

“Two top political scientists tell us when America turned terribly wrong—and how the rich and powerful organized to do the turning. . . . Fascinating.”—Sam Pizzigagi, “Too Much,” an online newsletter of the Institute for Policy Studies

“Jacob Hacker and Paul Pierson brilliantly break the intellectual logjam over the causes of runaway inequality. Their findings put responsibility and control back into the hands of officeholders, elected and appointed. Winner-Take-All Politics is crucial reading for all those engaged in American politics.”—Thomas B. Edsall, political editor, Huffington Post, and correspondent, The New Republic
or
Not Currently Available for Direct Purchase
Copyright © 2020 American Booksellers Association