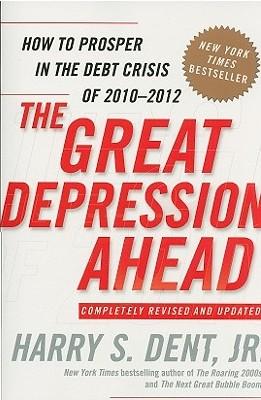 The Great Depression Ahead (Paperback)

Harry S. Dent predicted our current economic crisis, and he foresees still more to come. He predicts that we are headed further towards a major depression reminiscent of Japan's major recession more than a decade ago, from which their real estate market has yet to recover. With the current state of the stock market causing investors around the world to be nervous, and searching for answers, The Great Depression Ahead offers important advice to help readers not just survive, but prosper in the face of the crash. Dent has developed theories that have accurately predicted changes in the market. He is a frequent target of economists, yet with few exceptions, Dent has always been right about the market. With fully updated predictions and reflections on all that has happened since the hardcover came out in December of 2008, this is a book on the economic crisis that we can't afford not to read.

Praise For The Great Depression Ahead: How to Prosper in the Debt Crisis of 2010-2012…

"While being one of the most bullish and accurate forecasters for 20 years, Dent has always been warning that this great boom would end around 2008-2009. He now sees a bigger crash ahead and a deflationary environment that could ravage your portfolio. His warnings and predictions are well worth reading and taking seriously." -- David Bach, #1 New York Times bestselling author of Start Late, Finish Rich and The Automatic Millionaire

"While many talk of change these days, the real question lies in assessing in what direction things will change. Harry Dent does a masterful job using demographics and other key cycles to lay out where and when changes will come that will have sweeping ramifications for our pocketbooks, our way of life, and our nation. I cannot more highly recommend this book." -- Mark Sanford, governor of South Carolina

"Economists cannot forecast the economy very well, and most would admit it if their jobs didn't depend on the fiction that they can. So most economists become closet extrapolators, with some minor tweaking for visible pending developments and policy changes. Even I can see to the next corner pretty well, but I can't see around the corner. There is one exception, however. Demographics! Demography, as they say, is destiny. The reason is that you can see the future based on the facts of the present and demonstrated behavior. You can see the pig, or the pigs, going through the python. Harry Dent is the reigning expert in applying sophisticated demographic analysis to economic forecasting. His past record of getting it right speaks for itself. I hope he's wrong this time. I hope we don't have a great depression by 2010. But given his track record, I won't be betting against him." -- Robert D. McTeer, Distinguished Fellow, National Center for Policy Analysis, and former president of the Federal Reserve Bank of Dallas