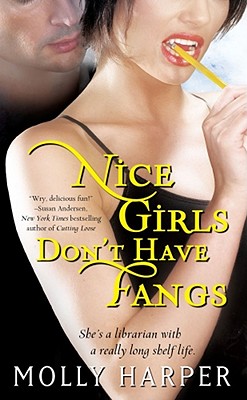 The first in the Half-Moon Hollow series is “wry, delicious fun” (Susan Andersen, New York Times bestselling author) as it follows a librarian whose life is turned upside down by a tempestuous and sexy vampire.

Maybe it was the Shenanigans gift certificate that put her over the edge. When children’s librarian and self-professed nice girl Jane Jameson is fired by her beastly boss and handed twenty-five dollars in potato skins instead of a severance check, she goes on a bender that’s sure to become Half Moon Hollow legend. On her way home, she’s mistaken for a deer, shot, and left for dead. And thanks to the mysterious stranger she met while chugging neon-colored cocktails, she wakes up with a decidedly unladylike thirst for blood.

Jane is now the latest recipient of a gift basket from the Newly Undead Welcoming Committee, and her life-after-lifestyle is taking some getting used to. Her recently deceased favorite aunt is now her ghostly roommate. She has to fake breathing and endure daytime hours to avoid coming out of the coffin to her family. She’s forced to forgo her favorite down-home Southern cooking for bags of O negative. Her relationship with her sexy, mercurial vampire sire keeps running hot and cold. And if all that wasn’t enough, it looks like someone in Half Moon Hollow is trying to frame her for a series of vampire murders. What’s a nice undead girl to do?