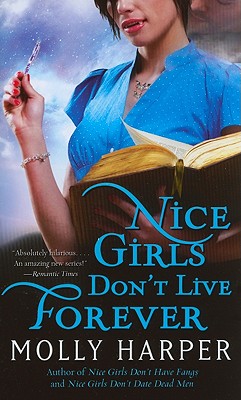 Nothing sucks the romance out of world travel like a boyfriend who may or may not have broken up with you in a hotel room in Brussels. Jane Jameson's sexy sire Gabriel has always been unpredictable, but the seductive, anonymous notes that await him at each stop of their international vacation, coupled with his evasive behavior over the past few months, finally push Jane onto the next flight home to Half Moon Hollow -- alone, upset, and unsure whether Gabriel just ended their relationship without actually telling her.

Now the children's-librarian-turned-vampire is reviving with plenty of Faux Type O, some TLC from her colorful friends and family, and her plans for a Brave New Jane. Step One: Get her newly renovated occult bookstore off the ground. Step Two: Support her best friend, Zeb, and his werewolf bride as they prepare for the impending birth of their baby...or litter. Step Three: Figure out who's been sending her threatening letters, and how her hostile pen pal is tied to Gabriel. Because for this nice girl, surviving a broken heart is suddenly becoming a matter of life and undeath....