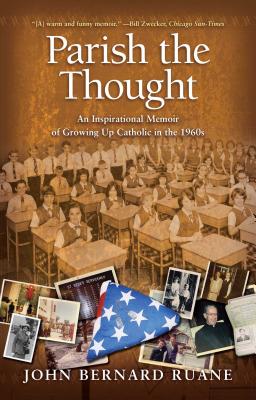 An Inspirational Memoir of Growing Up Catholic in the 1960s

In a warm and affectionate narrative that "transports readers back to a time before cable television, cell phones, and the Internet" (Atlanta Journal-Constitution), John Bernard Ruane paints a marvelous portrait of his Irish-Catholic boyhood on the southwest side of Chicago in the 1960s. Capturing all the details that perfectly evoke those bygone days for Catholics and baby boomers everywhere, Ruane recounts his formative years donning the navy-and-plaid school uniform of St. Bede's: the priests and nuns; bullies, best friends, and first loves; and most memorable teachers -- including the miniskirted blonde who inspired lust among the fifth-grade boys but was fired for protesting the Vietnam War. Here are stories from the heart of his hardworking, blue-collar family: the good times and bad; sibling rivalries; summers by the lake; delivering newspapers in the frigid Chicago winter; the fire that destroyed the family home; and the loss of their beloved mother to cancer. And here are priceless accounts of Ruane's days as an altar boy: from an embarrassing bell-ringing mishap, to serving a strict pastor who built a magnificent church but couldn't inspire Christian spirit, to the Heaven-sent guitar-playing priest who turned worship around for a generation of youth.

John Bernard Ruane wrote for the Chicago Sun-Time for nearly a decade, the paper he first delivered as a boy.  He has also written five plays all produced in his home town of Chicago.  His short film Comedy on Rye won the Illinois FilmCam Award.  For the past fifteen year, he has owned an operated a marketing and communications company and coached youth sports.  He and his wife Charlotte recently celebrated his twenty-fifth wedding anniversary.  They have four children and reside in Roswell, Georgia.


Praise For Parish the Thought: An Inspirational Memoir of Growing Up Catholic in the 1960s…

"John Bernard Ruane writes about a truly memorable parish, St. Bede's in the Archdiocese of Chicago. His witty but moving recall of his years growing up is a marvelous tribute to his mother and father and to the parish itself. Chicago priests and parishes have shaped literally millions of Catholics, and all of us now have reason to be grateful to John." -- Francis Cardinal George, OMI, Archbishop of Chicago