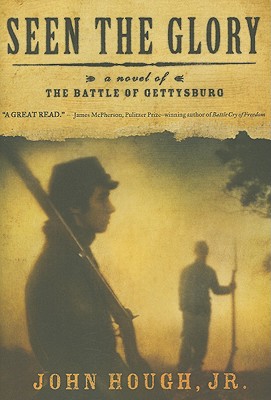 A Novel of the Battle of Gettysburg

John Hough’s superbly readable historical novel, the revealing coming-of-age story of two young brothers fighting in the civil War, evokes the hardships and camaraderie of ordinary soldiers and civilians set against the bloody drama of the battle of Gettysburg.

• Brilliant characters: raised by their abolitionist father on martha’s Vineyard, eighteen-year-old Luke and sixteenyear- old Thomas Chandler volunteer for the union. They join the Army of the Potomac in Virginia and take part in the long march north in June, 1863, to intercept General Lee. Luke writes home to rose, their black Cape Verdean housekeeper, with whom he shares a secret that Thomas discovers on the eve of the Battle of Gettysburg. The truth enrages Thomas and causes a rift between the brothers. When the battle is over, only one will survive.

• A classic in the making: Seen the Glory re-creates the Civil War experience as vividly as the classic novel The Killer Angels. The soldiers of the storied 20th massachusetts regiment, the sullen Southerners they march past, the hopeful freedmen and worried slaves, the terrified residents of Gettysburg, the battle-hardened Confederate soldiers are all rendered with brilliant realism and historical accuracy.

Praise For Seen the Glory: A Novel of the Battle of Gettysburg…

"Terrific. Hough has caught the spirit of young enlisted men in the army, and has done a splendid job of research on the Twentieth Massachusetts to get its role in the Gettysburg campaign right. It is a great read." -- James M. McPherson, author of the Pulitzer Prize-winning Battle Cry of Freedom: The Civil War Era

"It reads as if you were there. Captures the chaos, excitement, brutality and nature of the battle as well as anyone has. It is the way I think a soldier in combat saw it." -- Scott Hartwig, Gettysburg Battlefield Historian

"Just when you think there are no new stories under the sun about the Civil War-here it comes! John Hough looks at the theme of race and the battle of Gettysburg from a strikingly different angle. Join up and go to war with these boys from the Vineyard; you won't be able to catch your breath until this fast, brilliant novel is over. Seen the Glory is an original, profound novel, with the best dialogue of the period I have ever read." -- Lee Smith, author of On Agate Hill, Fair and Tender Ladies, and Oral History

"John Hough has created a true American story, truer than our collective memory has allowed until now. For that reason it deepens our understanding of the waste and tragedy of the Civil War-and the challenge for us of living out its complicated legacy." -- Lorene Cary, author of Black Ice and The Price of a Child

John Hough Jr. is the author of five previous novels, including Seen the Glory: A Novel of the Battle of Gettysburg, winner of the American Library Association’s 2010 W.Y. Boyd Award, The Last Summer, and three works of nonfiction. He is a graduate of Haverford College, a former VISTA volunteer, speech writer for Senator Charles Mathias of Maryland, and assistant to James Reston at the Washington Bureau of The New York Times. He grew up in Falmouth, Massachusetts, and now lives on Martha’s Vineyard.
Loading...
or
Not Currently Available for Direct Purchase