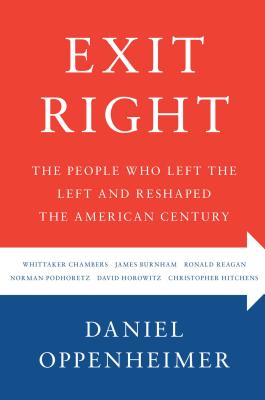 A provocative, intimate look at the evolution of America's political soul through the lives of six political figures--from Whittaker Chambers to Christopher Hitchens--who abandoned the left and joined the right. In Exit Right, Daniel Oppenheimer tells the stories of six major political figures whose journeys away from the left reshaped the contours of American politics in the twentieth century. By going deep into the minds of six apostates--Whittaker Chambers, James Burnham, Ronald Reagan, Norman Podhoretz, David Horowitz, and Christopher Hitchens--Oppenheimer offers an unusually intimate history of the American left, and the right's reaction. Oppenheimer is a brilliant new voice in political history who has woven together the past century's most important movements into a single book that reveals the roots of American politics. Through the eyes of his six subjects, we see America grow, stumble, and forge ahead--from World War I up through the Great Depression and World War II, from the Red Scare up through the Civil Rights Movement, and from the birth of neoconservatism up through 9/11 and the dawn of the Iraq War. At its core, Exit Right is a book that asks profound questions about why and how we come to believe politically at all--on the left or the right. Each of these six lives challenges us to ask where our own beliefs come from, and what it might take to change them. At a time of sky-high partisanship, Oppenheimer breaks down the boundaries that divide us and investigates the deeper origins of our politics. This is a book that will resonate with readers on the left and the right--as well as those stuck somewhere in the middle.
or
Buy Here
Copyright © 2020 American Booksellers Association