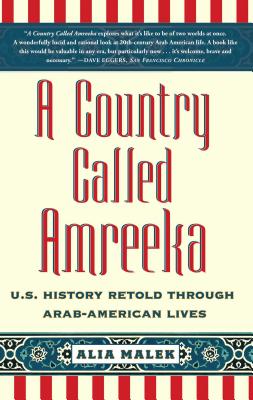 The history of Arab settlement in the United States stretches back nearly as far as the history of America itself. For the first time, Alia Malek brings this history to life. In each of eleven spellbinding chapters, she inhabits the voice and life of one Arab American, at one time-stopping historical moment.

Separately, the chapters in A Country Called Amreeka transport us; together, they offer a vital piece of the mosaic of our American history and a fresh, urgent, and exciting perspective on a teeming community whom it has become essential for us to understand.

"Alia Malek's impassioned and harrowing set of profiles of Arab-Americans gives vitality and resonance to a cause that is dear to my heart: fostering cross-cultural understanding and respect. Infectiously readable, the profiles in A Country Called Amreeka add character and texture to the history of the Arab-American community, challenging every tired stereotype and giving us new insight into what it means to be an Arab-American today. This book gives us the faces behind the names, and tells the story of a community that both enriches and embraces the American fabric. A Country Called Amreeka, and the Americans who inhabit it, are remarkable."
--Her Majesty Queen Noor of Jordan, author of A Leap of Faith: Memoir of an Unexpected Life

ALIA MALEK is an author and civil rights lawyer. Born in Baltimore to Syrian immigrant parents, she began her legal career as a trial attorney at the U.S. Department of Justice's Civil Rights Division. After practicing law in the States, Lebanon, and the West Bank, Malek, who has degrees from Johns Hopkins and Georgetown universities, earned her master’s degree in journalism from Columbia University. Her reportage has appeared in Salon, The Columbia Journalism Review, and The New York Times. This is her first book.
Loading...
or support indie stores by buying on