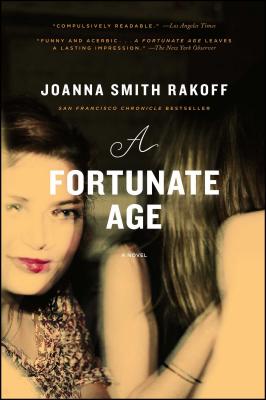 “Joanna Smith Rakoff's first novel chronicles the sometimes ludicrous, maddeningly funny, and, often, moving adventures of a gifted group of twenty-something friends in New York City just after college graduation. Combining cockeyed details of development that ring true with empathy and insight, Rakoff tells the story of marriages, children, and the success (or failure) of these characters' art with a light and witty touch. A portrait of a generation, A Fortunate Age is a delight”
— Jill Owens, Powell's Books, Inc, Portland, OR
View the List

Instantly compelling and immensely satisfying, A Fortunate Age details the lives of a group of Oberlin graduates whose ambitions and friendships threaten to unravel as they chase their dreams, shed their youth, and build their lives in Brooklyn during the late 1990s.

There’s Lil, a would-be scholar whose wedding brings the group back together; Beth, who struggles to let go of her old beau Dave, a onetime piano prodigy trapped by his own insecurity; and Emily, an actor perpetually on the verge of success— and starvation—who grapples with her jealousy of Tal, whose acting career has taken off. At the center of their orbit is wry, charismatic Sadie Peregrine, who coolly observes her friends’ mistakes but can’t quite manage to avoid making her own. As they begin their careers, marry, and have children, they must navigate the shifting dynamics of their friendships and of the world around them—from the decadent age of dot-com millionaires to the sobering post–September 2001 landscape. Smith Rakoff’s deeply affecting characters capture a generation.

Praise For A Fortunate Age: A Novel…

“The long-awaited book that perfectly captures the '90s, that time of social and financial excess that set the stage for the current economic collapse.”
— NPR.org

“An absorbing, if at times sprawling, story of a group of idealistic friends coming of age in the big city.”
— The Boston Globe

“An expansive and elegantly executed time capsule of the dot.com generation finding its feet during a critical moment in history.”
— New York Daily News

Joanna Smith Rakoff has written for The New York Times, Time Out New York, The Los Angeles Times, Newsday, Vogue, O: The Oprah Magazine, and other publications. She holds a B.A. from Oberlin College; an M.A. from University College, London; and an M.F.A. from Columbia University. She lives in New York with her husband and son.
Loading...
or
Not Currently Available for Direct Purchase