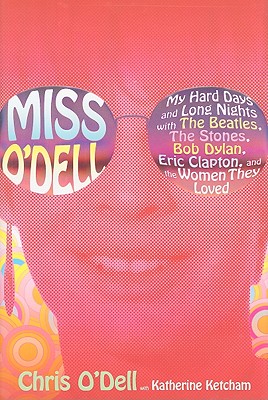 My Hard Days and Long Nights with The Beatles, The Stones, Bob Dylan, Eric Clapton, and the Women They Loved

CHRIS O'DELL WASN'T FAMOUS. SHE WASN'T EVEN ALMOST FAMOUS. BUT SHE WAS THERE.

She was in the studio when the Beatles recorded The White Album, Abbey Road, and Let It Be, and when Paul recorded "Hey Jude," she sang in the chorus.

She was at Ringo's kitchen table when George Harrison said, "You know, Ringo, I'm in love with your wife." And Ringo replied, "Better you than someone we don't know."

She typed the lyrics to George Harrison's All Things Must Pass. She lived with George and Pattie Boyd at Friar Park, developed a crush on Eric Clapton, and unwittingly got involved in the famous love story between Eric and Pattie.

She's the subject of Leon Russell's "Pisces Apple Lady," a song he wrote to woo her. Other rock legends with whom she was intimate include Ringo, Mick Jagger, and Bob Dylan.

She worked with the Rolling Stones as their personal assistant on their infamous 1972 tour and did a drug run for Keith Richards.

She's "the woman down the hall" in Joni Mitchell's song "Coyote" about a love triangle on Bob Dylan's Rolling Thunder Revue tour. She's the "mystery woman" pictured on the back of the Rolling Stones album Exile on Main Street. She's the "Miss O'Dell" of George Harrison's song about her.

Miss O'Dell is the remarkable story of an ordinary woman who lived the dream of millions -- to be part of rock royalty's trusted inner circle. Illustrated with private photographs and jam-packed with intimate anecdotes, Miss O'Dell is a backstage pass to some of the most momentous events in rock history.


Praise For Miss O'Dell: My Hard Days and Long Nights with The Beatles, The Stones, Bob Dylan, Eric Clapton, and the Women They Loved…

“If there were such a thing as a female Forrest Gump of rock ‘n’ roll, Chris O’Dell would be it.” --High Times

"One of the most rollicking and enjoyable classic rock memoirs of recent years…don’t mistakenly file this book under Groupie Lit." --Houston Press