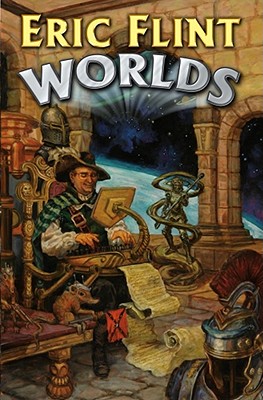 1. Eric Flint has co-written three New York Times best sellers. 2. His Ring of Fire alternate history series has over half a million copies in print. 3. Best-selling author Eric Flint has a large and still growing audience. His 1632, which began his blockbuster alternate history series, was a smash hit, with over 78,000 copies sold and an 89% sell through to date. Publishers Weekly called it "gripping and expertly detailed." 4. Trade advertising 5. Advertising in Locus, Kliatt, more 6. Large distribution of ARCs to top accounts and reviewers 7. Special backlist discounts for Flint titles 8. Co-op available 9. Featured title on Baen.com Welcome to the many worlds of Eric Flint. Known for his New York Times best-selling alternate history novels, Flint is equally a master of shorter forms, and this large volume gathers the best of Flint's shorter works. This generous selection includes: several stories and short novels set in Flint's celebrated Ring of Fire alternate history series; two stories from Flint's Joe's World humorous fantasy series; a story with Dave Freer, set in their popular rats, bats and vats series; a short novel set in Flint and David Drake's Belisarius series; and several shared-universe stories set in David Drake's Foreign Legions universe, and a story set in David Weber's best-selling Honor Harrington universe. In addition to the fiction, Eric Flint has written an overall introduction, plus an introduction for each story, telling how it came to be written, which will make this an irresistible book for the thousands of Eric Flint fans.

Eric Flint is the co-author of three New York Times best sellers in his "Ring of Fire" alternate history series. His first novel for Baen, Mother of Demons, was picked by Science Fiction Chronicle as a best novel of the year. His 1632, which launched the Ring of Fire series, won widespread critical praise, as from Publishers Weekly, which called him "an SF author of particular note, one who can entertain and edify in equal, and major, measure." A longtime labor union activist with a Master's Degree in history, he currently resides in northwest Indiana with his wife Lucille.
Loading...
or
Not Currently Available for Direct Purchase