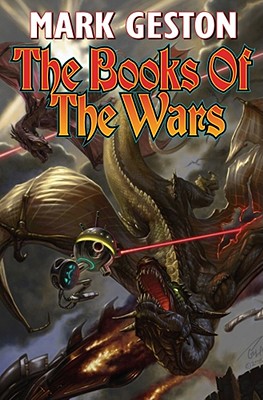 The Books of the War

1. This is a trilogy that will have cross-genre appeal, both for readers of science fiction, and readers of fantasy. 2. It will also appeal to readers of Jack Vance, Marion Zimmer Bradley and H.P. Lovecraft. 3. The volume has new introductions by best-selling author David Drake, and by Mark Geston. 4. Featured book on Baen.com. Complete in one volume for the first time: Three novels making up a saga of the distant future, when the Earth and its inhabitants have transformed almost beyond recognition, science has all but become sorcery, and humanity is threatened by creatures out of the past's darkest legends. Lords of the Starship The spaceship Victory was to be seven miles long, a third of a mile in diameter, and have a wingspread of three and a half miles. It would have been a daunting undertaking even for the high-tech civilization that had collapsed centuries ago, but the heroic project had caught the imagination of a decadent nation, becoming an almost religious obsession. But who were the shadowy figures behind the project, and what was the real goal of the herculean project? Out of the Mouth of the Dragon The prophets agreed that the world, with its decaying cities and hopelessly corrupt people, was doomed. But then came the call to the final Armageddon, in which the forces of Good and the forces of Evil would meet in the final battle and decide whether Creation would either be renewed or end, like a dying candle flame. And Amon VanRoark knew he must follow that call. The Siege of Wonder: For centuries, the crumbling civilization built on science had battled the opposing realm of wizardry without victory. Then the Special Office sent Aden, with an electronic eye in place of his own, to plant a spy transmitter in a legendary unicorn, the talisman of the most powerful wizard, to spy upon the highest councils of sorcery itself. A critically-praised epic trilogy of science and sorcery and the twilight realm between them.

Geston was born in Atlantic City, New Jersey. He graduated from from Kenyon College in Ohio with a degree in history, and received his law degree from New York University Law School in 1971. His first science fiction novel, Lords of the Starship, written when he was 20 and still in college, was widely praised, as were its two sequels, Out of the Mouth of the Dragon and The Siege of Wonder. He has also published the novels The Day Star (DAW) and Mirror to the Sky (AvoNova), as well as short fiction in such magazines as Amazing Stories and the annual collections The Year's Best SF #4 and The Year's Best Short Fiction (HarperCollins, 1991). He is a full time lawyer, practicing in Boise, Idaho.
Loading...
or
Not Currently Available for Direct Purchase