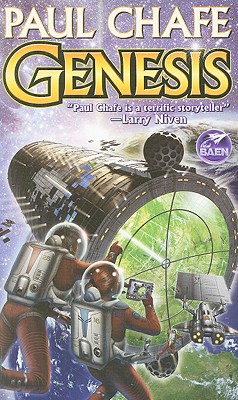 1. This is "Big Idea" science fiction, in the same class as Larry Niven's Ringworld and its sequels, or Arthur C. Clarke's Rama novels, written by a working scientist with a military background. 2. Paul Chafe contributed stories to the top-selling Man-Kzin Wars volumes VII, VIII and IX, and is well-known to the readers of that top-selling series (over 350,000 copies in print). 3. An infantry officer in the Canadian forces Reserve who has served with four regiments, he brings first-hand military experience to this novel. 4. Advertising in Locus, more. The human race is running out of time on overcrowded Earth, and only one man has the courage to save it. Colony ship Ark is the greatest project the human race will ever attempt, a self contained world one hundred years in the building, launched on a ten thousand year voyage to carry the seeds of civilization to the stars. It is humanity's final gamble for escape from a desperate world, but the price of hope is measured in lives. Joshua Crewe, Ark's designer. Obsessed with his vision, he's devoted his life to winning the power to turn it into reality. No burden is too great to bear in pursuit of his dream--especially when other people are the ones to bear it. Aurora Brady, first of the spaceborn, with one foot in the future and one in the past. She must give power to her enemies to see Ark launched, but giving too much will mean its destruction. Jedidiah Fourgere, a simple farm boy, he finds himself caught up in a revolution that will forever change the balance of power in Ark's hermetically sealed world. Torn between love and faith, humanity's future lies in his hands. Master storyteller Paul Chafe presents Genesis, the gripping first book of the Ark trilogy.

Paul Chafe was born in Toronto, Ontario in 1965. Currently he is pursuing graduate studies in Electrical Engineering at Dalhousie University in Halifax, Nova Scotia. He is an infantry officer in the Canadian armed forces reserve and has served with four regiment. When he isn't writing he devotes his spare time to flying sailplanes, parachuting, cycling and travel. He has one son, Christian, who is 8.
Loading...
or
Not Currently Available for Direct Purchase