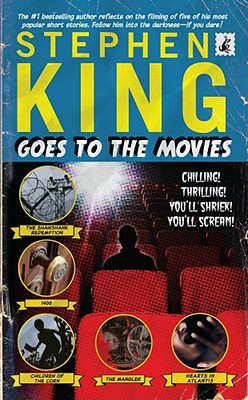 Stephen King revisits five of his favorite short stories that have been turned into films: The Shawshank Redemption (based on the novella "Rita Hayworth and the Shawshank Redemption") was nominated for seven Academy Awards, including Best Picture and best actor for Morgan Freeman. 1408 starred John Cusack and Samuel L. Jackson and was a huge box office success in 2007. The short story "Children of the Corn" was adapted into the popular Children of the Corn. The Mangler was inspired by King's loathing for laundry machines from his own experience working in a laundromat. Hearts in Atlantis (based on "Low Men in Yellow Coats," the first part of the novel Hearts in Atlantis) starred Anthony Hopkins.

This collection features new commentary and introductions to all of these stories in a treasure-trove of movie trivia.

Stephen King is the author of more than sixty books, all of them worldwide bestsellers. His recent work includes The Institute, Elevation, The Outsider, Sleeping Beauties (cowritten with his son Owen King), and the Bill Hodges trilogy: End of Watch, Finders Keepers, and Mr. Mercedes (an Edgar Award winner for Best Novel and an AT&T Audience Network original television series). His novel 11/22/63 was named a top ten book of 2011 by The New York Times Book Review and won the Los Angeles Times Book Prize for Mystery/Thriller. His epic works The Dark Tower and It are the basis for major motion pictures, with It now the highest grossing horror film of all time. He is the recipient of the 2018 PEN America Literary Service Award, the 2014 National Medal of Arts, and the 2003 National Book Foundation Medal for Distinguished Contribution to American Letters. He lives in Bangor, Maine, with his wife, novelist Tabitha King.
or
Not Currently Available for Direct Purchase
Copyright © 2020 American Booksellers Association