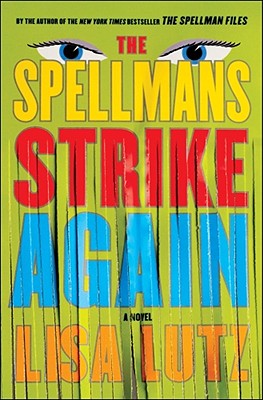 “The fourth and final installment of the Spellman Quartet finds the Spellmans spying on each other more than they are for their clients. Mom is keeping tabs on Isabel's dates in the hopes that she'll get married. The kids want to know why parts of the house are disappearing. Could someone really be stealing doorknobs and light fixtures? Lutz has written a quirky and sometimes bizarre tale that's definitely good for a laugh.”
— Anne McMahon, Boswell Book Company, Milwaukee, WI
View the List

• A series beloved by fans and critics alike: Lisa Lutz’s debut novel, The Spellman Files , a New York Times bestseller, sold in twenty-three countries and was released in mass market in the spring of 2009. Curse of the Spellmans , its followup, was a national bestseller nominated for the 2008 Edgar Award for Best Novel, and will be released in mass market just prior to the release of Revenge of the Spellmans in paperback and The Spellmans Strike Again in hardcover. .

• The fourth and final book: The Spellmans Strike Again is the last installment in the unique Spellman series, beloved by mystery booksellers and fans of Janet Evanovich. “The end of the Spellmans? Now that should have you on the edge of your seat,” says the Daily News (New York). Though clamoring fans will have a word to say about that….