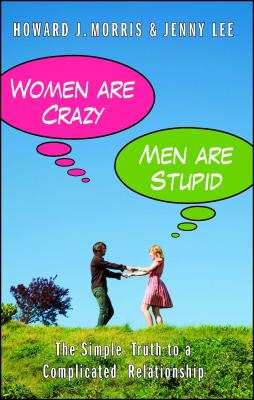 Women Are Crazy, Men Are Stupid

The Simple Truth to a Complicated Relationship

THE REVEALING AND RIP-ROARINGLY FUNNY GUIDE TO MAKING EVERY RELATIONSHIP SMARTER, SANER, AND HAPPIER

It's all very simple. When it comes to women, men are profoundly stupid. And when it comes to men, women—no matter how intelligent or mature—are completely crazy. Based on this groundbreaking insight, comedy writers and real-life couple Howard J. Morris and Jenny Lee have devised a relationship guide that is refreshingly honest, completely hilarious, and surprisingly practical. Using their own crazy/stupid romance as an example, they explain why women ask questions they don’t want answered—and why men persist in answering them. Why do guys suck at being romantic? And why does every conversation with a woman lead back to whether or not she’s fat? With wit, hard-earned wisdom, and an entertaining he said/she said format, the authors explore the unwitting method to his dumbness and the valid reasons behind her insanity while providing real relationship solutions and helping couples to reach the place where giving isn’t giving in, needing isn’t needy, and the sexes can break dysfunctional patterns and find a way to live happily ever after.

Howard J. Morris is the cocreator and coshowrunner of the Netflix hit Grace and Frankie. He’s also created two shows you’ve never heard of, but they were good. Trust him. Holding the Baby on Fox, and In Case of Emergency on ABC, which was on opposite American Idol during the Sanjaya craze, so Howard had to explain to his then six-year-old son, why America would rather watch a boy sing poorly, then watch Daddy’s show. It was an important lesson in showbusiness that every six-year-old should learn. Howard’s most important show business lesson came when a studio executive called to tell him how much he loved his pilot, exclaiming, “It’s the most original thing I’ve ever read. It’s just like Dharma and Greg!”
Loading...
or support indie stores by buying on