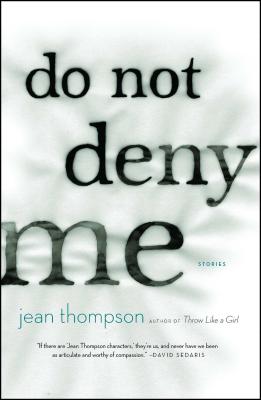 Do Not Deny Me

When Jean Thompson—“America’s Alice Munro” (Kirkus Reviews, starred review)—is telling stories, “You cannot put the book down” (The Seattle Times), and her superlative new collection, Do Not Deny Me, is one to be savored, word by word.

• Award-winning storyteller gaining popularity: Jean Thompson’s short fiction has been honored by the National endowment for the Arts and the Guggenheim Foundation; Who Do You Love: Stories was a National Book Award finalist for fiction and was promoted by David Sedaris during his own lecture tour; and Throw Like a Girl: Stories was a New York Times Notable Book and a San Francisco Chronicle Best Book of the Year. The collection is also in its sixth printing, as Thompson’s longstanding critical acclaim crosses over into a popular following. Do Not Deny Me is perfectly positioned to gain an even wider audience.

• Do Not Deny Me: Here is a title that demands—and commands—attention in and of itself. Yet Thompson’s latest collection is no literary dare, delivering as it does twelve dazzling new stories that together offer, with wit, humor, and razor-sharp perception, a fictional primer on how Americans live day to day. In Thompson’s writing, The New York Times Book Review has noted, “some of the biggest satisfactions happen line by line, thanks to Thompson’s effortless ability to tip her prose into the universal.” Thompson succeeds as “one of our most astute diagnosticians of contemporary experience” (The Boston Globe).

Praise For Do Not Deny Me: Stories…

"Thompson...delivers a deeply affecting collection that elevates the quotidian to the sublime....explore[s] a bewildering array of experience...Thompson immerses readers in details and emotions so consuming and convincing that the inane vagaries of modern life can take on near mythic importance. This collection shows the confidence and power of a writer in her prime." -- Publishers Weekly, Starred Review

"[Thompson's] particular grace...may be that her language and approach at first seem so straightforward that it's only partway through reading a story that, like one of her characters, we experience the surprise of a new world unfolding from the ordinary....twilit, elegiac...downright funny, too...Reviewing such a remarkable writer, one's own words can seem too ordinary, but Thompson's talent is such that it can overcome even those limitations." -- Booklist, Starred Review

"I don't deny it. I didn't know Jean Thompson's short fiction until I began reading this new volume of a dozen stories -- and didn't stop. Move over, Alice Munro, this gifted writer now sits in my mind near the throne of the short-story queens and kings of old. She is a master of dialogue, character, pacing and plot, and -- anyone who loves the form will have to cheer about this...Thompson employs spare, plain language, whose rhythms she assembles appropriately for various occasions." -- Alan Cheuse, Chicago Tribune

"[Thompson's] latest collection, Do Not Deny Me, is compelling, funny, thought-provoking.... Thompson is an astute observer of the pitfalls of contemporary life, how it isolates and challenges, how it brings out one's worst and best. Her clear-eyed, thought-provoking stories highlight rare, precious moments of grace even as she wisely notes the human tendency toward selfishness, pettiness and general bad behavior." -- Connie Ogle, The Miami Herald

"Thompson...takes us to a disturbing place in this darkly beautiful collection of short stories...Enthusiastically recommended." -- Library Journal

"The experiences of ordinary people...are precisely depicted in this fifth collection from the increasingly accomplished Thompson...who wields illuminating quotidian details and stunningly apt clichés with lethal skill, demonstrates how closely their desires and disappointments parallel and echo our own....Wonderful work from a contemporary master of scrupulous observation, plain statement and unvarnished common sense." -- Kirkus

"[Thompson's] at home anywhere and everywhere. She's at home in the skins of women and men, young and old, losers and winners, tyrants and victims, flakes and dupes and dopes and geniuses and soldiers and bikers and moms. Her characters hail from small towns and big cities. In her sparkling and sometimes heartbreaking short stories...Thompson channels all kinds of personalities, but she does it so artfully, with such supple, unaffected grace." -- Julia Keller, Chicago Tribune

"Thompson takes tragic, ordinary figures and lifts them to the sublime in prose that's often as funny as it is sad." -- Jeanne Kolker, Wisconsin State Journal