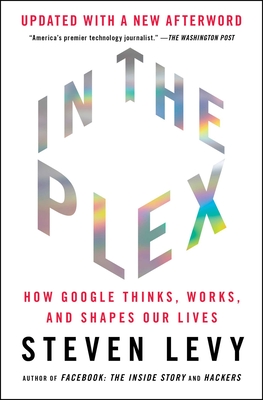 “The most interesting book ever written about Google” (The Washington Post) delivers the inside story behind the most successful and admired technology company of our time, now updated with a new Afterword.

Google is arguably the most important company in the world today, with such pervasive influence that its name is a verb. The company founded by two Stanford graduate students—Larry Page and Sergey Brin—has become a tech giant known the world over. Since starting with its search engine, Google has moved into mobile phones, computer operating systems, power utilities, self-driving cars, all while remaining the most powerful company in the advertising business.

Granted unprecedented access to the company, Levy disclosed that the key to Google’s success in all these businesses lay in its engineering mindset and adoption of certain internet values such as speed, openness, experimentation, and risk-taking. Levy discloses details behind Google’s relationship with China, including how Brin disagreed with his colleagues on the China strategy—and why its social networking initiative failed; the first time Google tried chasing a successful competitor. He examines Google’s rocky relationship with government regulators, particularly in the EU, and how it has responded when employees left the company for smaller, nimbler start-ups.

In the Plex is the “most authoritative…and in many ways the most entertaining” (James Gleick, The New York Book Review) account of Google to date and offers “an instructive primer on how the minds behind the world’s most influential internet company function” (Richard Waters, The Wall Street Journal).

Steven Levy is editor at large at Wired magazine. The Washington Post has called him “America’s premier technology journalist.” His was previously founder of Backchannel and chief technology writer and senior editor for Newsweek. Levy has written seven previous books and his work has appeared in Rolling Stone, Harper’s Magazine, Macworld, The New York Times Magazine, Esquire, The New Yorker, and Premiere. Levy has also won several awards during his thirty-plus years of writing about technology and is the author of several previous books including Facebook: The Inside Story; Insanely Great; The Perfect Thing; and In the Plex. He lives in New York City.
Loading...
or support indie stores by buying on