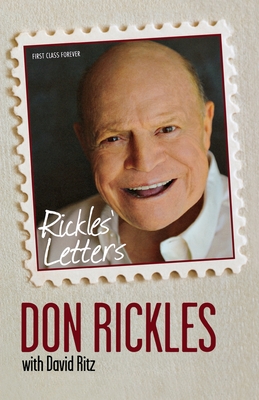 Along with collected letters of Ralph Waldo Emerson, Thomas Jefferson and Wendell Willkie, Rickles' Letters illustrates the power of eloquent correspondence and offers universal wisdom for the ages. For example:

RICKLES TO MRS. LINCOLN: "Sorry you had problems at Ford's Theatre last night, but could you get me a couple of aisle tickets for the Saturday matinee?"

RICKLES TO ARNOLD SCHWARZENEGGER: "Lose the cigar. It's hard enough to understand you without it."

RICKLES TO CLINT EASTWOOD: "How many guys could do a movie about Iwo Jima from the Japanese point of view? I got nervous; I thought you were going to let them win!"

RICKLES TO PRESIDENT CARTER: "Forget your hammers and nails and Habitat House and read my book."

RICKLES TO QUEEN ELIZABETH: "Is it true your husband has a day job working at a sword factory?"

RICKLES TO BENJAMIN FRANKLIN: "Cousin Herbie was doing great selling candles until you came up with the stupid idea of flying a kite."

RICKLES TO MAYOR BLOOMBERG: "What do I have to do to get a cab around here?"

Don Rickles is looking for his first big break in show business. If you have a gig for him, contact his agent (as soon as he gets one).