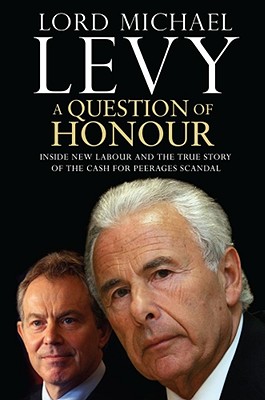 A Question of Honour (Hardcover)

Lord Michael Levy hit the headlines with his involvement in the alleged 'cash for peerages' scandal that rocked Tony Blair's government. He was cleared of all the allegations made but on the way, his name and reputation were dragged through the media. Now, he tells his side of the story for the first time.

Michael Levy has had a remarkable life. Born in the East End of London into a religious Jewish family, his childhood was impoverished but happy. He was educated at Hackney Downs Grammar School and married in 1967. He qualified as a chartered accountant and later became a hugely successful pop music mogul, looking after such acts as Alvin Stardust, Darts, Guys and Dolls, Bad Manners and Chris Rea. Following his beloved mother's death, he decided to sell his record company to Warner Bros. and use his time to pursue charity matters. Michael Levy became one of the most important and influential leaders in the Jewish world, raising enormous amounts of money for charities and educational foundations.

In 1994, Levy and his wife attended a dinner party in London and met Tony Blair, then Shadow Home Affairs Spokesman. They became good friends and Levy endeavoured to help Labour back into power. During the years that followed, Levy was Blair's trusted ally and tennis partner. When Blair became Prime Minister in 1997, Levy was behind the scenes for many of the dramas and crises of the first term. He was entrusted with the role of Blair's personal envoy to the Middle East and discusses his relationship with Robin Cook and the Foreign Office and the leaders of Israel, Palestine, Syria, Jordan and Egypt.

Lord Levy tells here, for the first time, the whole inside story of the 'cash for peerages' scandal, including his own arrest and questioning, and the role of fellow 'witnesses' and 'suspects' from Blair to Jonathan Powell, Ruth Turner and Sir Christopher Evans. Highly revealing about the relationship between Tony Blair and Gordon Brown, and about repercussions from those turbulent months that are still impacting on Brown's government today, it is an explosive story from one of our era's most fascinating individuals.

Lord Michael Abraham Levy was born in the East End of London in 1944. He was a successful chartered accountant and then music mogul before dedicating his life to charity work and his work for Tony Blair and the Labour Party. He lives in London.

Praise For A Question of Honour: Inside New Labour and the True Story of the Cash for Peerages Scandal…

"Revenge of the No10 Fixer" -The Observer