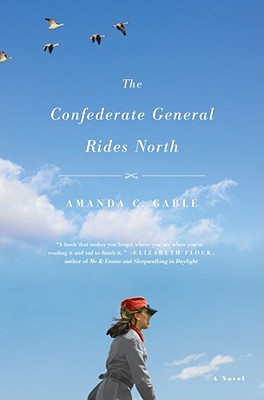 “Amanda Gable has given us an unforgettable character in 11-year-old Civil War scholar Kat McConnell. As the navigator for her beautiful, but volatile, mother's escape northward from Marietta, Georgia, Kat plots their course to hit every major battlefield. As Kat imagines the scenes of desperation and despair from those old battles, we see the ones occurring in her world and love her for her fierce intelligence, loyalty, and bravery.”
— Laura Keys, Blue Elephant Book Shop Inc., Decatur, GA
View the List

In this richly imagined, utterly original debut a mother- daughter road trip leads a young girl—a precocious Civil War buff—to a hard-won understanding of the American history she loves and the personal history she inherits.

Eleven-year-old  Katherine  McConnell  is  so  immersed in Civil War history that she often imagines herself a general, leading troops to battle. When Kat’s beautiful, impulsive mother wakes her early one morning in the summer of 1968 to tell her they will be taking a road trip from Georgia  to  Maine  to  find  antiques  for  a  shop  she  wants  to open,  Kat  sees  the  opportunity  for  adventure  and  a  respite from her parents’ troubled marriage. Armed with a road atlas and her most treasured history books, Kat cleverly charts a course that will take them to battlefields and historic sites and, for her mother’s sake she hopes, bring them home a success. But as the trip progresses, Kat’s experiences test her faith in her mother and her loyalty to the South, bringing her to a dif- ficult new awareness of her family and the history she reveres. And when their journey comes to an abrupt and devastating halt  in  Gettysburg,  Kat  must  make  an  irrevocable  choice about their ultimate destination.

Deftly narrated with the beguiling honesty of a child’s per- spective and set against the rich backdrop of the South during the 1960s, The Confederate General Rides North gracefully blends a complex mother-daughter relationship, the legacy of the Civil War, and the ache of growing up too soon.

"Meet eleven-year-old Katherine McConnell, a whip-smart and enchanting heroine whose imaginary life as a Civil War general helps her navigate her family's own troubled history and the unpredictable battlefield of adolescence. Gable's rendering of Kat is note-perfect, and she spins her journey with a deft mix of humor and pathos. The Confederate General Rides North is vibrant, bighearted, and wholly original. I love this book and can't recommend it loudly enough." -- Joshilyn Jackson , bestselling author of Gods in Alabama and The Girl Who Stopped Swimming

"The Confederate General Rides North is the compelling story of Kat McConnell, an endearing young heroine who survives life on the road with her mother by retreating into her vast knowledge of Civil War history. She reenacts battles and imagines war-torn landscapes in a way that reflects her own life while also offering escape. Amanda Gable is a first-rate storyteller and her portrayal of Kat's psychological survival on this often harrowing journey is moving and memorable." -- Jill McCorkle , author of Carolina Moon and Creatures of Habit

" I have just traveled the Civil War battlefields of Gettysburg and Manassas with eleven-year-old Katherine McConnell, the precocious and tenderhearted heroine of The Confederate General Rides North. What a trip it was! With beautiful writing and a plot that stampedes to its conclusion, author Amanda Gable poignantly navigates the bumpy roads of troubled families and the young girls who must endure them. Like the heroes who obsess her, Kat McConnell will take her place in your heart and memory." -- Betsy Carter, author of Swim to Me and The Puzzle King

"This whimsical -- and impressive -- debut novel, with its fresh, original take on a difficult mother-daughter relationship, rings true in every word. Indeed, readers everywhere will love being drawn into Gable's -- and into Katherine's -- oh-so-original world." -- Rosemary Daniell, author of Secrets of the Zona Rosa: How Writing (and Sisterhood) Can Change Women's Lives