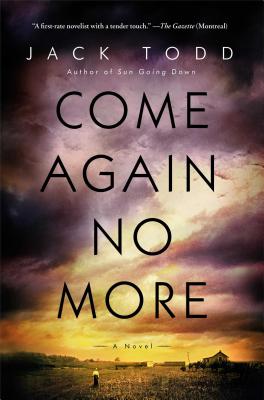 From the award-winning author of the acclaimed Sun Going Down comes an intimate portrait of a marriage and a family struggling to survive turbulent times that echo our own. THE PAINT FAMILY built an American empire on the legendary strength of their character, their wit, and their resolve, but the foreclosures, bank failures, and joblessness of the Great Depression may bring their world down around them. The family's foundation is further weakened by a rift running through two generations, scarred over by stubbornness and pain. Come Again No More is a uniquely American story about a family navigating a changing world and the tough choices it presents. The indomitable family patriarch, Eli, owns everything as far as the eye can see, but there is an emptiness in his heart. After a dramatic accident leaves him struggling for life, he must reckon with the decisions he made that separated him from the daughter he loved most. A chance for redemption presents itself in his granddaughter Emaline. Eli has faced his own mortality many times, but his pride seems to have a death grip on him. Emaline marries Jake, a womanizing prizefighter who promises to help her realize her dream of making a life on a farm. But Jake's inner demons and nature itself conspire against Emaline's fierce determination to make their marriage work. Life sends Emaline many joys when she least expects them, but ultimately, she must make tough decisions about holding on and letting go. Based on the author's family letters and diaries, Come Again No More is a bittersweet novel, a moving and vivid portrayal of a family's triumphs and tragedies paralleling the glories and shameful underbelly of a nation struggling through the Great Depression.

Praise For Come Again No More…

"A memorable story of the hardscrabble life on the dusty Nebraska plains during the Great Depression....There are obvious parallels with other Dust Bowl novels such as The Grapes of Wrath, but the perspectives and stories are different enough that Come Again No More is a worthy entry in the genre, and a fine salute to Todd's family history." --Historical Novels Review


"A sweeping tale of the American West in the shadow of the Great Depression." –Booklist


"The spirit and flavor of the period, the willingness to enlist almost anything in the service of a good story is spot on. [Todd] shows the passion of someone telling a story he wants and needs to tell....A first-rate novelist with a tender touch." --The Gazette (Montreal)


"Compelling...Conveys the tenacity and distress of Americans caught in the vise of the Great Depression."--Publishers Weekly