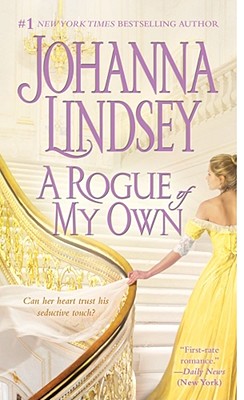 A Rogue of My Own

In #1 New York Times bestselling author Johanna Lindsey’s captivating regency romance, an innocent young lady’s first brush with royal court intrigue lands her at the altar alongside one of London’s most notorious rogues.

For Lady Rebecca Marshall, a whirlwind of excitement begins when she becomes a maid of honor at the court of Queen Victoria. But when Rebecca unknowingly steps into the rivalry between the Queen’s spymaster and a noblewoman who uses the maids as courtly spies, she is soon entangled in a web of deceit with the charming marquis Rupert St. John. The devastatingly handsome ne’er-do-well is the cousin of Raphael Locke, with whom Rebecca was once infatuated…He’s also a secret agent of the crown who leads a double life. Certain that guileless Rebecca is spying on him, Rupert seduces her—then, forced to wed, he believes she has set a trap of the worst sort in order to marry into his powerful family! But as he comes to know Rebecca’s true heart, his vow of revenge and infidelity becomes a desire to share many passionate nights—only with his beautiful wife.

Praise For A Rogue of My Own…

Johanna Lindsey (1952–2019) was world-renowned for her “mastery of historical romance” (Entertainment Weekly), with more than sixty million copies of her novels sold. She was the author of nearly sixty nationally bestselling novels, many of which reached the #1 spot on the New York Times bestseller list. Lindsey lived in New Hampshire with her family.
Loading...
or
Not Currently Available for Direct Purchase