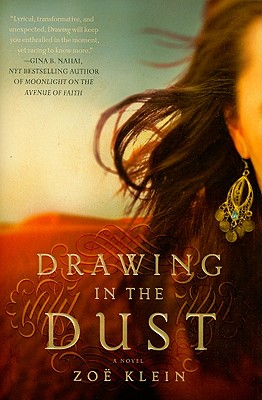 Drawing in the Dust (Hardcover)

“Lyrical and moving, fast-paced and fascinating, Drawing in the Dust tells the story of a love that transcends time and cultural barriers. Set in Israel, the story has echoes of the bomb-riddled world we see on the nightly news, but it also renders a world rich with the juxtaposition of history and modernity.”
— Annie Leonard, The Next Chapter, Knoxville, IA
View the List

Powerful and suspenseful, Zoë Klein's unforgettable debut novel is a richly evocative and boundless love story that reverberates from biblical times to the modern world.

Brilliant archaeologist Page Brookstone is convinced bones speak, yet none of the ancient remnants she has unearthed during her twelve years of toiling at Israel's storied battlegrounds of Megiddo has delivered the life-altering message she so craves. Which is why the story of Ibrahim and Aisha Barakat, a young Arab couple who implore Page to excavate the grounds beneath their house in Anatot, instantly intrigues her.

The Barakats claim the ghosts of two lovers haunt their home, overwhelming everyone who enters with love and desire. Ignoring the scorn of her peers, Page investigates the site, where she is seduced by an undeniable force. Once Ibrahim presents Page with hard evidence of a cistern beneath his living room, she has no choice but to uncover the secret of the spirits.

It is not long before Page makes miraculous discoveries -- the bones of the deeply troubled prophet Jeremiah locked in an eternal embrace with a mysterious woman named Anatiya. Buried with the entwined skeletons is a collection of Anatiya's scrolls, whose mystical words challenge centuries-old interpretations of the prophet's story and create a worldwide fervor that threatens to silence the truth about the lovers forever.

Caught in a forbidden romance of her own, and under constant siege from religious zealots and ruthless critics, Page risks her life and professional reputation to deliver Anatiya's passionate message to the world. In doing so, she discovers that to preserve her future in the land of the living, she must shake off the dust of the dead and let go of her own painful past. As poignant and thought-provoking as the beloved bestsellers The Red Tent and People of the Book, Zoë Klein's historically rich debut novel is a lyrical and unexpected journey that will stay with readers forever.