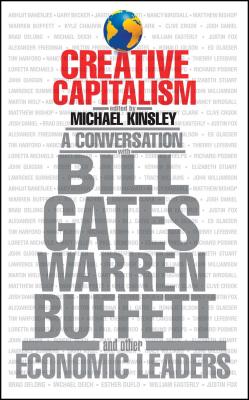 A Conversation with Bill Gates, Warren Buffett, and Other Economic Leaders

Bill Gates is more than the world's most successful capitalist; he's also the world's biggest philanthropist.

Gates has approached philanthropy the same way he revolutionized computer software: with a fierce ambition to change the rules of the game. That's why at the 2008 annual meeting of the World Economic Forum in Davos, Switzerland, Gates advocated a creative capitalism in which big corporations, the distinguishing feature of the modern global economy, integrate doing good into their way of doing business.

This controversial new idea is discussed and debated by the more than forty contributors to this book, among them three Nobel laureates and two former U.S. cabinet secretaries. Edited by author and columnist Michael Kinsley, Creative Capitalism started as a first-of-its-kind online conversation that brought together some of the world's best minds to engage Gates's challenge. From Warren Buffett, who seconds Gates's analysis, to Lawrence Summers, who worries about the consequences of multiple corporate objectives, the essays cover a broad spectrum of opinion. Judge Richard Posner dismisses Gates's proposal as trumped-up charity that will sap the strengths of the profit-maximizing corporation, while journalist Martin Wolf maintains that the maximization of profit is far from universally accepted, and rightly so. Chicago Nobel laureate Gary Becker wonders whether altruistic companies can survive in a competitive economy, while Columbia Nobel laureate Edmund Phelps argues that a little altruism might be the right prescription for a variety of market imperfections.

Creative Capitalism is not just a book for philanthropists. It's a book that challenges the conventional wisdom about our economic system, a road map for the new global economy that is emerging as capitalism adapts itself once again to a changing world.

Michael Kinsley is a noted journalist and political commentator. He was one of the most successful editors of The New Republic magazine. He was the host of CNN’s Crossfire and founded Slate, the nation’s first online magazine. He also served as the editorial page editor for The Los Angeles Times and has written for The Guardian and the New Yorker. He is a regular contributor to Time magazine. Michael currently lives in Seattle, Washington with his wife Patty Stonesifer, CEO of the Bill and Melinda Gates Foundation.

editor at The Guardian.
Loading...
or support indie stores by buying on