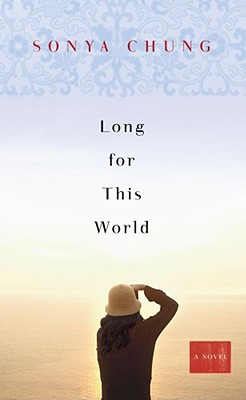 Pushcart Prize nominee Sonya Chung has displayed her stunning talent in her award-winning short fiction and essays. Now, she renders the compelling story of a troubled family straddling cultures, fleeing and searching, in her piercing and profoundly humane first novel. .

In 1953, on a small island in Korea, a young boy stows away on the ferry that is carrying his older brother and his wife to the mainland. Fifty-two years later, Han Hyun-kyu is on a plane flying back to Korea, leaving behind his own wife in America. It is his daughter, Jane—a war photographer recently injured in a bombing in Baghdad and forced to return to New York—who journeys to find him in the small town in South Korea where his brothers have settled. Here, father and daughter take refuge from their demons, flirt with passion, and, in the wake of tragedy, discover something deeper and more enduring than they could have imagined..

Just as Monica Ali’s Brick Lane introduced readers to a world that is both exotic and immediate, Long for This World illuminates the complexities and the richness of family bonds and establishes Chung as an exciting new voice in fiction..


Praise For Long for This World…

An intricately structured and powerfully resonant portrait of lives lived at the crossroads of culture, and a family torn between the old world and the new, Long For This World marks a powerful debut from a young writer of great talent and promise.

— Kate Walbert, author of A Short History of Women and The Gardens of Kyoto

A wonderful and eminently readable novel, rich in cultural understanding and emotional insight. Sonya Chung is an extremely talented writer.

— Mary Yukari Waters, author of The Favorites and The Laws of Evening

The title of Chung's exquisite novel seems to be missing a word: "not long for this world" would be the easy, expected phrase. But little is easy or expected in this multilayered story of two brothers—one Korean and the other who chooses to become Korean American—and their scattered families, whose lives converge in a perfectly blended East/West house on a faraway Korean island. When Han Hyun-ku unexpectedly arrives at his younger brother's home, he is escaping an American life circumscribed by a detached wife and troubled son. His exhausted daughter, Jane, a renowned photojournalist of death and destruction, follows her missing father. Strangers that they are even among family, father and daughter are gratefully absorbed into a seemingly easy rhythm, but the temporary peace cannot ease inevitable tragedy. "Some people are not long for this world," Jane remarks. "The rest of us survive." VERDICT Readers who enjoyed superbly crafted, globe-trotting family sagas such as Kamila Shamsie's Burnt Shadows, Naeem Murr's The Perfect Man, or Changrae Lee's A Gesture Life will swoon over Chung's breathtaking debut. —Terry Hong, Smithsonian Asian Pacific American Program, Washington, DC