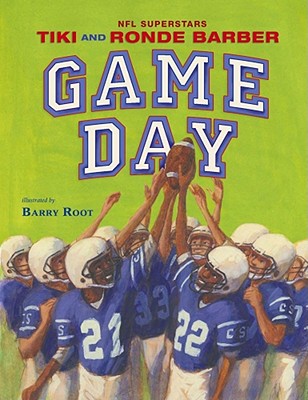 Ronde and Tiki are a team. They are twins, they are each other’s best friends and biggest fans, and they play on the same football team in this picture book based on a true story.

Tiki has had seven long touch-down runs this season, and Ronde is proud of his brother, but he can’t help feeling a little down when Tiki gets all the glory. If Ronde hadn’t been leading the way with his blocks, Tiki wouldn’t have been clear to score. Ronde thinks nobody notices the guy who blocks; they only notice the guy who scores. Will the day ever come when Ronde will get his chance?

Written by two NFL superstars, this story of perseverance and teamwork will inspire. Barry Root’s glowing illustrations bring to life all the excitement and energy of a great game and a team working together.

Ronde Barber is a record-holding cornerback who retired after fifteen seasons with the Tampa Bay Buccaneers. He is one of only two cornerbacks selected to the Pro Bowl five times. He is married with two daughters.