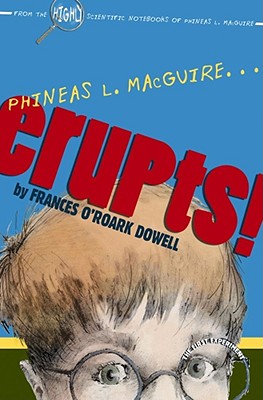 HERE'S WHAT YOU NEED TO KNOW ABOUT PHINEAS L. MACGUIRE,
BOY-SCIENTIST EXTRAORDINAIRE, AKA MAC:

3. He does not have a best friend. He does, however, have an un-best friend, who he does not -- repeat, not -- want to upgrade to best-friend status.

But disaster strikes when his teacher pairs Mac and his un-best friend together for the upcoming science fair. Worse, this un-best friend wants the project to be on dinosaurs, which is so third grade. Worse still, it seems as though everyone else in his class finds the un-best friend as unlikable as Mac does. But, being a boy-scientist, once Mac notices this, he just might have to do some investigating.

This very funny young middle-grade novel includes tantalizingly grue- some experiments for exploding your own volcanoes and imploding marshmallows.

Frances O’Roark Dowell is the bestselling and critically acclaimed author of Dovey Coe, which won the Edgar Award and the William Allen White Award; Where I’d Like to Be; The Secret Language of Girls and its sequels The Kind of Friends We Used to Be and The Sound of Your Voice, Only Really Far Away; Chicken Boy; Shooting the Moon, which was awarded the Christopher Award; the Phineas L. MacGuire series; Falling In; The Second Life of Abigail Walker, which received three starred reviews; Anybody Shining; Ten Miles Past Normal; Trouble the Water; the Sam the Man series; The Class; and most recently, How to Build a Story. She lives with her family in Durham, North Carolina. Connect with Frances online at FrancesDowell.com.