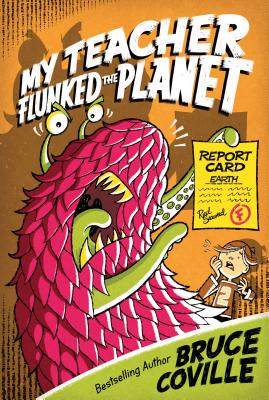 My Teacher Flunked the Planet (My Teacher Books #4)

Alien Invasion of Earth!
Peter Thompson, a typical seventh-grader, finds himself touring the planet with his friends Susan Simmons and Duncan Dougal, and three aliens in disguise!
Their mission? To file the final report that will determine Earth's future in the universe.
As the clock ticks away the hours before their meeting in space, the tour becomes weirder and weirder. The three friends come face-to-face with a plague of poots and "Big Julie" -- the weirdest alien yet!
Meanwhile Peter discovers a secret that was hidden for decades. Will his discovery save Earth, or isi it already too late to stop the aliens from destroying the planet?