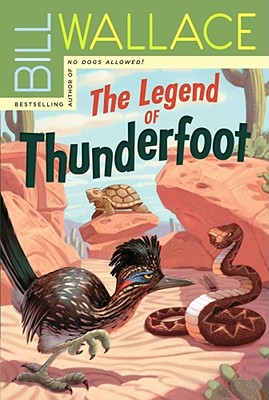 The Legend of Thunderfoot

The day of the Naming is an important one for young roadrunners. That's when roadrunner parents judge the speed, courage, and hunting skill of their offspring and choose fitting names for them.

One proud fledgling dreams of being named Muscles, or Dash, or even Hunter. If only he hadn't pursued those three juicy grasshoppers for a final snack. If only he'd remembered his parents' lesson: "Always look before you leap." If only he'd paid more attention to the mouse family that had lost two children to a nearby snake. If only the rattler had given some warning before it struck....

Miraculously, the young roadrunner survives the attack, but not without damage. With their son's feet swollen to such an enormous size, his parents have no choice but to give him the humiliating name of Thunderfoot.

It's enough to make a roadrunner wallow in self-pity and give up. But the only thing bigger than Thunderfoot's feet is his heart, and with some not always gentle goading from a wise old gopher tortoise named Berland, he finds the courage to go forward and seek his destiny -- and to become the stuff of legends.

Praise For The Legend of Thunderfoot…