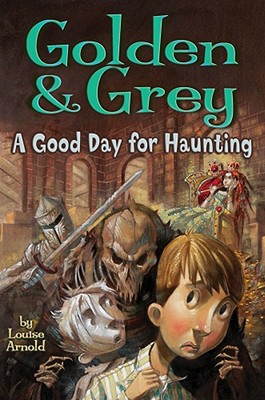 A Good Day for Haunting

After his triumph over a ghost collector and a doctor who does no good, Tom Golden thinks life is finally...well, golden. Grey Arthur and his ghostly crew have happily settled into their roles as Invisible Friends while Tom has made a new human friend with Pick-Nose Pete.

But when one friendly ghost is overly enthusiastic about his duties, the TV show Exceedingly Haunted Homes of England is called in to investigate. A hysterical fear of ghosts takes over the school, and the Invisible Friends are glad that they witness the chaos unheard and unseen. Too bad that the same cannot be said for the ghosts in the world beyond.

The disappearance of the Crown Jewels in a rather Poltergeist-like manner is trouble enough, but a frightening specter caught on film and a knight seen charging through streets and pedestrians spell trouble. Restoration of the peace between the ghostly and human realms may be too much for one boy to handle, but Tom hopes that the help of Grey Arthur and the Invisible Friends may be just what he needs to track down the cause of this supernatural chaos.

In this third installment to the Golden & Grey series, Louise Arnold takes the reader on an exciting adventure full of Laundry Runs, ancient castles, and the ever dark and dangerous woods.

Louise Arnold wrote her first poem (about the adventures of cheese-eating bees) at the age of four, and her love of writing was born. She graduated with a degree in drama from University of Kent in Canterbury, England, where she now resides.
Loading...
or
Not Currently Available for Direct Purchase