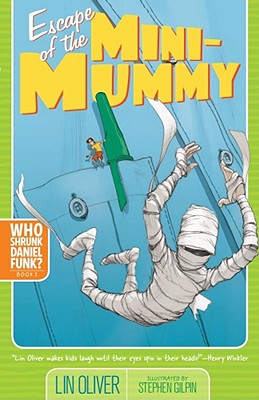 Daniel Funk can shrink to the size of the fourth toe on his left foot. But that's not his only skill. Daniel and his best friend, Vu, are entering the school diorama contest with a model of King Tut's tomb. If they win, they get tickets to a Lakers game. If they lose, they'll never hear the end of it from Vince the Pizza Prince, the most obnoxious guy in school.

But Daniel has a secret weapon: his miniature twin brother, Pablo. Pablo has disguised himself as a mummy and is hitching a ride to school in Daniel's diorama. Will Pablo the mini-mummy help them win the contest, or will he create a big-time Egyptian disaster?

In this hilarious new Daniel Funk adventure, illustrated throughout with Stephen Gilpin's lively drawings, Lin Oliver proves that a minibrother and some shredded toilet paper can create some giant-sized fun.