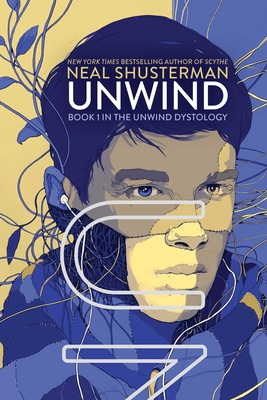 Three teens fight for their lives and each other in this breathtakingly suspenseful first book in the twisted, New York Times bestselling Unwind Dystology series by Neal Shusterman.

After America’s Second Civil War, the Pro-Choice and Pro-Life armies came to an agreement. According to their Bill of Life, human life may not be terminated from the moment of conception until the age of thirteen. But between the ages of thirteen and eighteen, the child may be gotten rid of by their parent through a process called “unwinding.”

By repurposing a teen’s organs and other body parts in living recipients, the unwound child’s life doesn’t technically end. According to society’s leaders, unwinding leads to a healthier and safer community, as troublesome and unwanted teens are used for the greater good.

Curtis is a rebel whose unwinding was ordered by his parents. Rita, a ward of the state, has been slated for unwinding due to cost cutting. And Lev, his parents’ tenth child, has been destined for unwinding since birth as a religious tithe. As their paths intersect, they start to fight for their own destinies. But do they stand a chance of escaping their fate or proving their lives are worth saving?

* "Gripping, brilliantly imagined futuristic thriller...The issues raised could not be more provocative--the sanctity of life, the meaning of being human--while the delivery could hardly be more engrossing or better aimed to teens."--Publishers Weekly, starred review

"Well-written, this draws the readers into a world that is both familiar and strangely foreign, and generates feelings of horror, disturbance, disgust and fear. As with classics such as 1984 and Fahrenheit 451, one can only hope that this vision of the future never becomes reality."--Kirkus Reviews

"Poignant, compelling, and ultimately terrifying, this book will enjoy popularity with a wide range of readers."--VOYA, 4Q4P

"Following in the footsteps of Jonathan Swift, Shusterman uncorks a Modest Proposal of his own to solve a Pro-Life/Pro-Choice dilemma...ingeniously developed cast and premise."--Booklist

"The shocking premise is unveiled immediately, and a nail-biting pace is sustained throughout, with the teens flung headlong into a true life-or-death struggle...these haunting debates will likely linger in the reader's mind even after the riveting plot fades...an ideal blend of philosophy and action set in a compelling futuristic landscape."--The Bulletin of the Center for Children's Books

"The power of the novel lies in what it doesn't do: come down explicitly on one side or the other."--The New York Times Book Review

Neal Shusterman is the New York Times bestselling author of more than thirty award-winning books for children, teens, and adults, including the Unwind dystology, the Skinjacker trilogy, Downsiders, and Challenger Deep, which won the National Book Award. Scythe, the first book in his latest series, Arc of a Scythe, is a Michael L. Printz Honor Book. He also writes screenplays for motion pictures and television shows. Neal is the father of four, all of whom are talented writers and artists themselves. Visit Neal at StoryMan.com and Facebook.com/NealShusterman.
Loading...
or
Not Currently Available for Direct Purchase