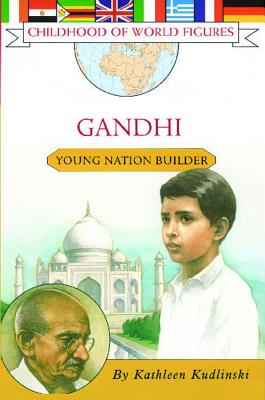 The man we remember simply as Gandhi was born Mohandas Gandhi in India in 1869. From an early age he was made keenly aware of the rigid Hindu caste system of his country, and was heavily influenced by his mother's ability to fast as a way to control her urges. Mohandas was married at the age of thirteen and continued his education, though he struggled as a student. He also struggled to find himself and to keep his moral center intact. At college in London, and then later at work in South Africa and India, Gandhi was appalled at the abject poverty he discovered and by the widespread denial of civil liberties and political rights he encountered. He ultimately dedicated his life to the struggle for fundamental human rights for all Indians.

Read all about the fascinating early years and eventual accomplishments of this inspiring leader.

Kathleen Kudlinski was born in Pennsylvania. When she grew up, she studied art and biology at the University of Maine. She became a science teacher, but when she stopped teaching, she tried writing. She is the author of books about Rosa Parks, Franklin Delano Roosevelt, Dr. Seuss, and many more.
or support indie stores by buying on
Copyright © 2020 American Booksellers Association