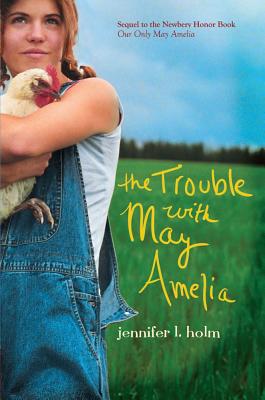 The Trouble with May Amelia

May Amelia Jackson captured readers' hearts in the Newbery Honor Book Our Only May Amelia. Now, after over ten years, Jennifer Holm is bringing this beloved character back in a beautiful way. The Trouble with May Amelia is a gorgeously written story that's as heartbreaking as it is funny.

May Amelia lives in pioneer Washingon State in 1900, and she just can't act the part of a proper young lady. Working a farm on the rainy Nasel River isn't easy - especially when you have seven brothers and a Pappa who proclaims that Girls Are Useless. May Amelia thinks she may have finally earned her father's respect when he asks her to translate for a gentleman who's interested in buying their land and making them rich. But when the deal turns out to be a scam, Pappa places all the blame on May. It's going to take a lot of sisu - that's Finnish for guts - to make things right.

"Holm incorporates warmth, humor, excitement and even a wedding into her story. . . . Narrating events in dryly witty, plainspoken first-person, this indomitable teen draws readers in with her account, through which her world comes alive. Readers who enjoyed the first novel should embrace May Amelia again and may well believe that the only “trouble” with her is that the sequel didn’t happen sooner.
-- Kirkus Reviews

* "Anyone interested in learning to write crowd-pleasing historical fiction for elementary school readers would be wise to study Holm's work. Since Our Only May Amelia (HarperCollins, 1999), Holm has collected three Newbery Honors, and this sequel demonstrates her mastery of writing a complete, exciting story in a trim novel. Twelve-year-old May Amelia Jackson lives on a farm in Washington State in 1900 with her parents, Finnish immigrants, and a passel of brothers. Life is hard, but Holm works humor into even the grimmest situations, and Gustavson's chapter-opening spot art adds a cozy, atmospheric touch. A ransacking bull (named Friendly) knocks down the outhouse (with May Amelia inside); suitors romancing Miss McEwing are sent packing in various, inventive ways lest the school lose its beloved teacher. Judicious use of Finnish phrases adds flavor, and details ground the story in an era when boys were still routinely "shanghaied" (involuntarily pressed into service on ships bound for Asia). "Best Brother" Wilbert tells her she's as irritating as a grain of sand in an oyster, and it's mighty fun to watch May Amelia morph into a pearl.
--Publishers Weekly, starred review

Adam Gustavson is a graduate of Rowan University and the Master of Fine Arts Illustration program at the School of Visual Arts in New York. In addition to illustrating picture books, he currently teaches at Passaic County Community College and Seton Hall University. He lives and paints in West Orange, New Jersey, with his wife, their children, several guitars, and a ferret named Gracie.
Loading...
or support indie stores by buying on