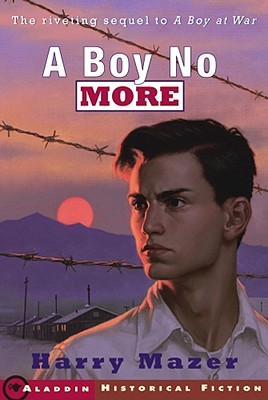 A Boy No More (Paperback)

"WHAT ABOUT WHAT THEY DID TO MY FATHER?...
THE JAPS KILLED HIM!"

Adam Pelko witnessed something horrible: the sinking of the USS Arizona during the attack on Pearl Harbor -- with his father aboard. Since then, Adam and his mother and sister have moved to California, where they are trying to rebuild their lives.

But no matter where Adam goes, he can't get away from the effects of the war. His best friend, Davi, has asked for help. Davi is Japanese American, and his father has been arrested, taken to Manzanar, a Japanese internment camp.

Adam isn't sure what to do. If he goes to Manzanar and starts asking questions, he could be risking his own life. But can he simply do nothing and risk losing Davi's friendship forever? Are Davi, his father, and all the other Japanese Americans taken from their homes responsible for what happened at Pearl Harbor?

In this riveting follow-up to his acclaimed book A Boy at War, Harry Mazer explores questions of friendship and loyalty against the backdrop of World War II, a time when boys had to grow up fast.

Harry Mazer is the author of many books for young readers, including Please, Somebody Tell Me Who I Am; My Brother Abe; the Boy at War trilogy; The Wild Kid; The Dog in the Freezer; The Island Keeper; and Snow Bound. His books have won numerous honors, including a Horn Book honor and an American Library Association Best Book for Young Adults citation. Along with his wife, Norma Fox Mazer, Harry received an ALAN award in 2003 for outstanding contribution to adolescent literature. He lives in Montpelier, Vermont.
or support indie stores by buying on
Copyright © 2020 American Booksellers Association