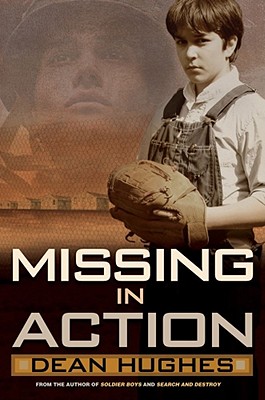 Dirty. Lazy. Good-for-nothing. Jay Thacker is used to hearing himself called names because his dad is half-Navajo. But he's hoping, now that he and his mom have moved to stay with his grandparents because of WWII, that things could be different. Delta is a tiny town in Utah, nothing like Salt Lake, where they used to live. And Jay's grandfather is an elder in the church, a beloved and well-respected man. Jay begins to make friends and even to make some money as he works the fields for his grandfather. There's just one problem: he works alongside a young man named Ken, who's from the camps in nearby Topaz. Which means Ken is a Jap. And Jay's dad, who's been fighting for the navy out in the Pacific, was recently declared Missing in Action.

An understated and moving story about an unlikely friendship from the author of the acclaimed SOLDIER BOYS, this is one of Dean Hughes's best novels to date.

Dean Hughes is the author of more than eighty books for young readers, including the popular sports series Angel Park All-Stars, the Scrappers series, the Nutty series, the widely acclaimed companion novels Family Pose and Team Picture, Search and Destroy, and Four-Four-Two. His novel Soldier Boys was selected for the 2001 New York Public Library Books for the Teen Age list. Dean Hughes and his wife, Kathleen, have three children and nine grandchildren. They live in Midway, Utah.
or
Not Currently Available for Direct Purchase
Copyright © 2020 American Booksellers Association