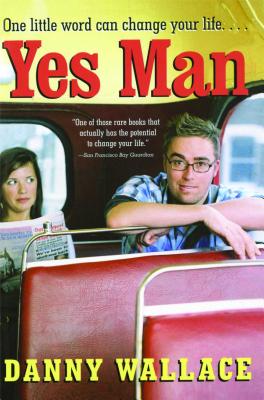 Recently single, Danny Wallace was falling into loneliness and isolation. When a stranger on a bus advises, "Say yes more," Wallace vows to say yes to every offer, invitation, challenge, and chance.

In Yes Man, Wallace recounts his months-long commitment to complete openness with profound insight and humbling honesty. Saying yes takes Wallace into a new plane of existence: a place where money comes as easily as it goes, nodding a lot can lead to a long weekend overseas with new friends, and romance isn't as complicated as it seems. Yes eventually leads to the biggest question of all: "Do you, Danny Wallace, take this woman . . ."

Yes Man is inspiring proof that a little willingness can take anyone to the most wonderful of places.

"One of those rare books that actually has the potential to change your life." -- San Francisco Bay Guardian

"[Danny Wallace is] as funny as Bill Bryson used to be." -- Independent on Sunday (London)

Danny Wallace is an award-winning writer who’s done lots of silly things. He’s been a quiz show host. A character in a video game. He’s made TV shows about monkeys, robots, and starting his own country. He has written lots of books for grown ups, in which he uses words like ‘invidious’, and he pretends he knows what they mean but he doesn’t. He thinks you’re terrific. Danny’s first book for children, Hamish and the Worldstoppers, was the first in a bestselling series, and his recent standalone, The Day the Screens Went Blank is highly acclaimed. The Luckiest Kid in the World is his latest novel for readers age 8+.
Loading...
or support indie stores by buying on