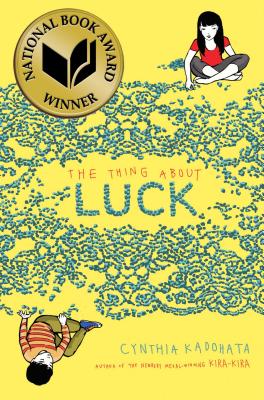 The Thing About Luck

The winner of the National Book Award for Young People’s Literature, from Newbery Medalist Cynthia Kadohata. There is bad luck, good luck, and making your own luck—which is exactly what Summer must do to save her family.

Summer knows that kouun means “good luck” in Japanese, and this year her family has none of it. Just when she thinks nothing else can possibly go wrong, an emergency whisks her parents away to Japan—right before harvest season. Summer and her little brother, Jaz, are left in the care of their grandparents, who come out of retirement in order to harvest wheat and help pay the bills.

The thing about Obaachan and Jiichan is that they are old-fashioned and demanding, and between helping Obaachan cook for the workers, covering for her when her back pain worsens, and worrying about her lonely little brother, Summer just barely has time to notice the attentions of their boss’s cute son. But notice she does, and what begins as a welcome distraction from the hard work soon turns into a mess of its own.

Having thoroughly disappointed her grandmother, Summer figures the bad luck must be finished—but then it gets worse. And when that happens, Summer has to figure out how to change it herself, even if it means further displeasing Obaachan. Because it might be the only way to save her family.

Cynthia Kadohata’s ode to the breadbasket of America has received six starred reviews and was selected as a National Book Award Finalist.

Praise For The Thing About Luck…

The Thing about Luck

By Cynthia Kadohata with illustrations by Julia Kuo

It seems that if Summer’s Japanese American family didn’t have bad luck, they’d have no luck at all. Certainly good luck (kouun) is elusive. Consider that Summer has had malaria; her little brother, Jaz, is friendless; her parents have to fly to Japan to take care of elderly relatives; and her grandmother (Obaachan) and grandfather (Jii-chan) must pay the mortgage by coming out of retirement to work for a custom harvesting company. When the siblings accompany their grandparents on the harvest, Summer helps her grandmother, a cook, while Jaz is Jaz: intense, focused, and bad-tempered. At first, things go reasonably well, but then Jii-chan becomes sick, and it appears that it might be up to Summer to save the day. Will she succeed? Kadohata has written a gentle family story that is unusual in its focus on the mechanics of wheat harvesting. Readers may skim the more arcane aspects of the labor-intensive work, focusing instead on the emotionally rich and often humorous dynamics of Summer’s relationship with her old-fashioned but endearing grandparents and her troubled younger brother. Another engaging novel from the Newbery Medal–winning Kadohata.

"Author Cynthia Kadohata does an excellent job of portraying the intensity of the lives of the farmers whose entire fortunes rest on their wheat crops being harvested at exactly the right point -- when the grain is mature and tests at the ideal moisture content. Any delay in harvesting combined with an untimely rain can conceivably wipe out the crop and the farmers' future, and readers get an eyeful of the ridiculously long hours the custom combine operators are forced to work when rain is forecast in the too-near future.

It clearly comes down to everybody working no matter what, or being out of a job.

What is most intense about the story is the position in which twelve year-old Summer finds herself. Having, myself, grown up an eldest child who worked alongside my parents, I well-remember what it is like to feel the need to take on adult worries and responsibilities at a young age. But I never faced the littlest fraction of what this girl on the cusp of adolescence is handed.

Summer's brother Jaz is a child with significant social challenges, being that he is developmentally somewhere on the autistic spectrum. Summer must always be a good big sister to him and be his support system. Her grandmother has a severe chronic back condition on top of sometimes being prickly and often being difficult to understand. When the situation arises, Summer must be able to immediately prepare the meals for the crew by herself and smooth over the tensions that arise. Then, when her grandfather becomes seriously ill just at the time when the crew is being squeezed the hardest by impending bad weather, Summer is forced to take on the worry of whether her grandparents will lose their jobs, and whether this will result in her parents defaulting on their mortgage and losing the house in Kansas that they all share.

It all makes an earlier event in the story -- where Summer is faced with telling the truth in a very uncomfortable situation -- look like child's play.

Realizing that THE THING ABOUT LUCK is set in the present time, and there are girls like Summer out there today, wandering the nation's breadbasket with their migrant worker parents or grandparents, makes this an even more powerful read about an America that is a whole different world.


This is going to be a book well-worthy of adoption for sixth grade English curriculums."
— Richie Partington, MLIS

"Twelve-year-old Summer and her Japanese-American family work every harvest season to earn money to pay their mortgage. But this year, they face unprecedented physical and emotional challenges.

It has been a particularly hard-luck year. Among other strange occurrences, Summer was bitten by a stray, diseased mosquito and nearly died of malaria, and her grandmother suffers from sudden intense spinal pain. Now her parents must go to Japan to care for elderly relatives. So Summer, her brother and their grandparents must take on the whole burden of working the harvest and coping with one emergency after another. She writes a journal chronicling the frightening and overwhelming events, including endless facts about the mosquitoes she fears, the harvest process and the farm machinery that must be conquered. As the season progresses, her relationships with her grandparents and her brother change and deepen, reflecting her growing maturity. Her grandparents’ Japanese culture and perspective are treated lovingly and with gentle humor, as are her brother’s eccentricities. Kadohata makes all the right choices in structure and narrative. Summer’s voyage of self-discovery engages readers via her narration, her journal entries and diagrams, and even through her assigned book report of A Separate Peace.

Readers who peel back the layers of obsessions and fears will find a character who is determined, compassionate and altogether delightful."
— Kirkus Reviews, starred review

*KADOHATA, Cynthia. The Thing About Luck. illus. by Julia Kuo. 288p. S & S/Atheneum. June 2013. Tr $16.99. ISBN 978-1-4169-1882-0; ebook $9.99. ISBN 978-1-4424-7467-3. LC 2012021287.
Gr 5-8–Fans of Kadohata’s Kira-Kira (S & S, 2004) will welcome this similarly gentle, character-driven exploration of familial bonds, this time set in the contemporary Midwest. With their parents called away to care for relatives in Japan, 12-year-old Summer and her younger brother, Jaz, accompany their grandparents, performing the grueling work that comes with the harvest season. In her likable voice, Summer observes the varying excitement, tedium, and challenges of harvesting wheat, sprinkling her narration with casual turns of phrase such as “OMG” and “epic fail” that will endear her to readers. Strong family ties suffuse this novel with a tremendous amount of heart. Though Summer’s brother has been diagnosed with a number of disorders, she prefers to think of him as simply “intense,” and, like most siblings, is alternately protective of and annoyed by his idiosyncrasies. Her grandparents, comically strict Obaachan and kindly Jiichan, bring warmth and humor with their cultural and generational differences. Kadohata expertly captures the uncertainties of the tween years as Summer navigates the balance of childlike concerns with the onset of increasingly grown-up responsibilities. She ponders the fragility of life after a brush with death from malaria, experiences newfound yearnings upon becoming preoccupied with a boy, and bravely steps up to save the day when her grandfather falls ill. The book’s leisurely pace and extensive information about grain harvesting require some amount of patience from readers, but their investment will be rewarded by Summer’s satisfying journey to self-actualization.–Allison Tran, Mission Viejo Library, CA
— SLJ

Cynthia Kadohata is the author of the Newbery Medal–winning book Kira-Kira, the National Book Award winner The Thing About Luck, the Jane Addams Peace Award and PEN America Award winner Weedflower, Cracker!, Outside Beauty, A Million Shades of Gray, Half a World Away, Checked, A Place to Belong, Saucy, and several critically acclaimed adult novels, including The Floating World. She lives with her dogs and hockey-playing son in California. Visit her online at CynthiaKadohata.com.