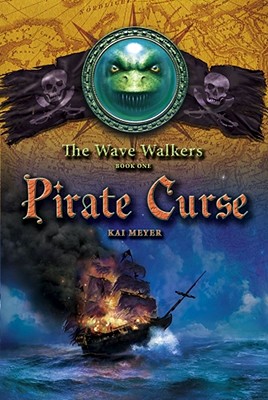 The Pirates of the Caribbean have a name for kids who walk on water -- they call them polliwogs. As far as fourteen-year-old Jolly knows, she's the last polliwog still alive -- and this special talent makes her invaluable to the pirate captain who raised her.

When someone sets a trap for Jolly's ship, she alone escapes. Washed up on a tiny island, she meets Munk, who has been raised in hiding. Munk longs to go to sea, but his parents are afraid of pirates. They have forbidden Munk to reveal his true identity -- he, too, is a polliwog.

But pirates are not the only threat in the Caribbean. Evil forces are stirring, and a demon from the sea attacks and murders Munk's parents. Was the demon really after Munk? And Jolly, too? Why are the polliwogs so valuable, and who's willing to kill to possess them?

Jolly and Munk must sail with a strange crew of outcasts, led by the mysterious Ghost Trader, to avenge their loved ones and try to stop an ancient, malevolent force known as the Maelstrom. What it will cost both teens, no one can tell -- in this thrilling fantasy from the extraordinary Kai Meyer.

Kai Meyer is the author of many highly acclaimed and popular books for adults and young adults in his native Germany. Pirate Curse, the first book in the Wave Walkers trilogy, was praised by Booklist as "a fast-paced fantasy featuring plenty of action and suspense." The Water Mirror, the first book in the Dark Reflections Trilogy, was named a School Library Journal Best Book, a Locus Magazine Recommended Read, a Book Sense Children's Pick, and a New York Public Library Book for the Teen Age. It received starred reviews in both School Library Journal and Publishers Weekly. School Library Journal has called Meyer "an expert at creating fantastical worlds filled with unusual and exotic elements." For more information please visit his website at www.kaimeyer.com.
Loading...
or
Not Currently Available for Direct Purchase