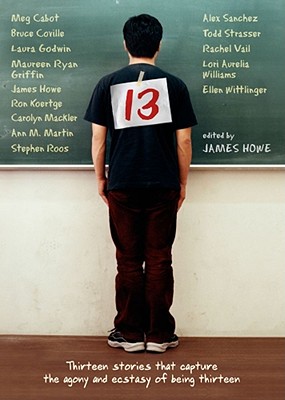 Thirteen Stories That Capture the Agony and Ecstasy of Being Thirteen

"If thirteen is supposed to be an unlucky number...you would think a civilized society could come up with a way for us to skip it."

-- from "What's the Worst That Could Happen?" by Bruce Coville

No one will want to skip any of the twelve short stories and one poem that make up this collection by some of the most celebrated contemporary writers of teen fiction. The big bar mitzvah that goes suddenly, wildly, hilariously out of control. A first kiss -- and a realization about one's sexual orientation. A crush on a girl that ends up putting the boy who likes her in the hospital. A pair of sneakers a kid has to have. By turns funny and sad, wrenching and poignant, the moments large and small described in these stories capture perfectly the agony and ecstasy of being thirteen.