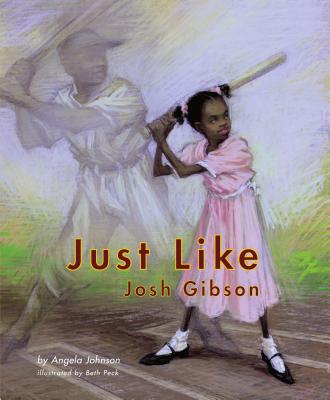 The story goes...
Grandmama could hit the ball a mile,
catch anything that was thrown,
and do everything else --
just like Josh Gibson.
But unfortunately, no matter how well a girl growing up in the 1940s played the game of baseball, she would have faced tremendous challenges. These challenges are not unlike those met by the legendary Josh Gibson, arguably the best Negro-League player to never make it into the majors.
In a poignant tribute to anyone who's had a dream deferred, two-time Coretta Scott King Award-winning author Angela Johnson and celebrated artist Beth Peck offer up this reminder -- that the small steps made by each of us inspire us all.

Angela Johnson has won three Coretta Scott King Awards, one each for her novels The First Part Last, Heaven, and Toning the Sweep. The First Part Last was also the recipient of the Michael L. Printz Award. She is also the author of the novels Looking for Red and A Certain October. Her books for younger readers include the Coretta Scott King Honor Book When I Am Old with You, illustrated by David Soman; Wind Flyers and I Dream of Trains, both illustrated by Loren Long; and Lottie Paris Lives Here and its sequel Lottie Paris and the Best Place, both illustrated by Scott M. Fischer. Additional picture books include A Sweet Smell of Roses, Just Like Josh Gibson, The Day Ray Got Away, and All Different Now. In recognition of her outstanding talent, Angela was named a 2003 MacArthur Fellow. She lives in Kent, Ohio. Visit her at AJohnsonAuthor.com.
Loading...
or support indie stores by buying on