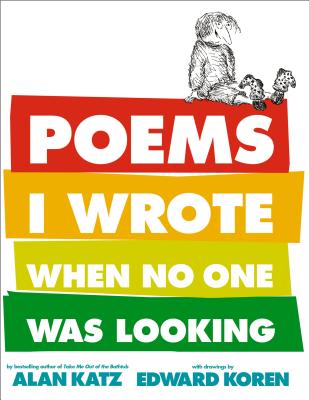 Poems I Wrote When No One Was Looking

Laugh out loud on this hilarious journey through the kooky creations of Alan Katz and Edward Koren. From the giggle-until-it-hurts author that brought you the Silly Dilly series, this collection of side-splitting verse will have readers slapping their knees and rolling in the aisles. Whether you’re staying out of trouble or constantly causing it, these rowdy rhymes turn our wacky world upside-down to reveal the pitfalls of hopeless homework, tricky travels, sibling shenanigans, and everything in between.

Praise For Poems I Wrote When No One Was Looking…

"I laughed out loud when I read the poems in this book, as did my students! B&W line drawings add to the humor and make the poems appealing to older students. Quite a few of the poems include mild bathroom humor, just the right type to appeal to upper elementary and middle school students."
--Library Media Connection, Jan/Feb 2012, Recommended

"As they did in Oops!, Katz and Koren once again craft a giggle-inducing collection of 100 humorous poems. . . . This collection should prove popular with readers who’ve enjoyed the work of Shel Silverstein, Jack Prelutsky, and Douglas Florian."
--School Library Journal, November 2011

"The succinct verses derive humor from puns, family dynamics, and bathroom humor as well as a generous sprinkling of general silliness. This is solid ground for amusing grade-school poetry, as demonstrated by the likes of Jack Prelutsky and Douglas Florian."
--BCCB, December 2011

Edward Koren may be best known for his work in the New Yorker magazine, where he has published nearly one thousand cartoons. He has written and illustrated several children's books, including Very Hairy Harry. He taught at Brown University and received a Guggenheim Fellowship. He lives with his family in Vermont.
Loading...
or
Not Currently Available for Direct Purchase