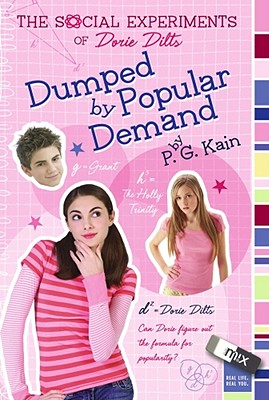 Dorie Dilts is about to move from California to New Jersey, and instead of seeing this as the worst thing to happen to her in her 13 years, Dorie sees this as a great opportunity--an opportunity to reinvent herself as one of the popular crowd, that is. When she arrives at her new school, she immediately sets out to determine who is the most popular and how they got that way. She quickly deduces it's a group of girls whom she dubs the Holly Trinity. And the one thing that connects them is their shared experience of having gone out with and been dumped by the arrogant Grant Braddish. One she determines this, Dorie is quickly on her way with a plan to win the heart of, and then get dumped by, Grant.

Dorie soon discovers Grant isn't as arrogant as some would think and maybe she would rather be with him than with the popular girls.

P.G. Kain lives in New York City, where he is the chair of Contemporary Culture and Creative Production in Global Liberal Studies at New York University.
or
Not Currently Available for Direct Purchase
Copyright © 2020 American Booksellers Association