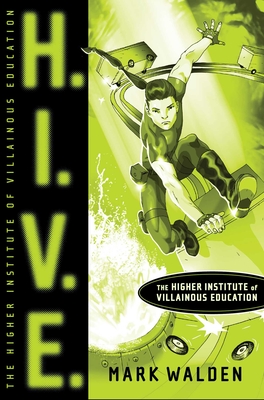 Otto Malpense may only be thirteen years old, but so far he has managed to run the orphanage where he lives, and he has come up with a plan clever enough to trick the most powerful man in the country. He is the perfect candidate to become the world's next supervillain.

That is why he ends up at H.I.V.E., handpicked to become a member of the incoming class. The students have been kidnapped and brought to a secluded island inside a seemingly active volcano, where the school has resided for decades. All the kids are elite; they are the most athletic, the most technically advanced, and the smartest in the country. Inside the cavernous marble rooms, floodlit hangars, and steel doors, the students are enrolled in Villainy Studies and Stealth and Evasion 101. But what Otto soon comes to realize is that this is a six-year program, and leaving is not an option.

With the help of his new friends: an athletic martial-arts expert; a world-famous, beautiful diamond thief; and a spunky computer genius -- the only other people who seem to want to leave -- can Otto achieve what has never been done before and break out of H.I.V.E.?

Mark Walden spent a decade as a video game designer and producer before becoming a fulltime writer and father. He has a BA in English literature and an MA in 20th-century literature, film, and television, both from Newcastle University. He is the author of the H.I.V.E. series and the Earthfall Trilogy and lives with his family in the United Kingdom.
Loading...
or support indie stores by buying on