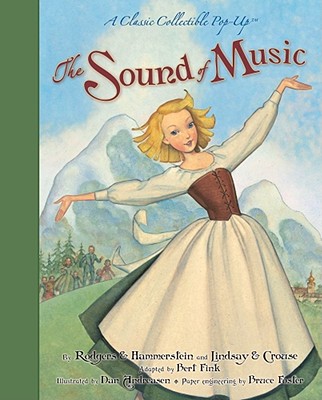 The Sound of Music

in this magnificent pop-up adventure drawn from

With paper engineering as unforgettable as each

heartwarming tale of familial love and growth. This

book, which is based on the beloved musical, includes

recognizable songs, such as “My Favorite Things” and

“Edelweiss.” This visually stunning work is sure to

become a favorite in your family’s library.

Bert Fink is a Senior Vice President a The Rodgers & Hammerstein Organization in New York City. He adapted the story of The Sound of Music from the Broadway musical by Richard Rodgers, Oscar Hammerstein II, Howard Lindsay, and Russel Crouse. For the past decade Fink has worked closely with the city and state governments of Salzburg, Austria, to nurture that region's historical connections to the true story of behind The Sound of Music. In 2005 Fink received the State of Salzburg's Gold Medal of Distinction for his contributions to the documentary features on the 40th Anniversary Edition DVD of The Sound of Music. A frequest lecturer on the American musical, Fink is currently an adjunct faculty professor at New York University.

Dan Andreasen is the illustrator of numerous picture books, including By the Dawn’s Early Light: The Story of the Star-Spangled Banner by Steven Kroll, which was named an ABA Kids’ Pick of the Lists and a Notable Children’s Trade Book in the Field of Social Studies; A Quiet Place by Douglas Wood; and Sailor Boy Jig by Margaret Wise Brown. He has also authored several picture books, including With a Little Help from Daddy and A Special Day for Mommy. Dan lives with his family in Medina, Ohio.
Loading...
or
Not Currently Available for Direct Purchase